So as explained some time ago, we are again playing a seeded tournament-style elimination game amongst each of the US domestic box office champion movies from the last 32 years, but this time with all-female judges.  Seeding was done via Rotten Tomatoes scores, with ties broken with Metacritic scores.  Three of our five judges will vote on each match-up of two films, with the winner advancing to the next round and the loser skulking off into obscurity, until we have our overall Champion!

We are now in our (Alternate) Round Three–having reduced our movies to the Elite 8 entries.  Of those 8, 5 are the same as the original version of this round, with Terminator 2, Jurassic Park, and Saving Private Ryan all getting further this time then before.  Other films were eliminated earlier, most notably The Dark Knight, which was the winner of the original version of this whole contest.

We now continue with Round Three!  Votes for each context are listed in the order I received them, except when it made for better suspense to mix them up.

Loey: Can adorable plush toys defeat Arnold at his baddest? In this case, absolutely. These movies couldn’t be more different, and while Terminator 2 is a sci-fi/action masterpiece, watching Toy Story could actually make you a better person. I feel improved just thinking about it.

Beth:  I must have seen Toy Story at least–AT LEAST–30 times. Maybe one third of those times were my choice. So there’s some bad blood there even though–EVEN THOUGH–I know it’s an incredible movie. But hear this in your mind: “Come with me if you want to live.”  It feels right. Let it happen.

Robin:   I have to go with Toy Story over Terminator 2, mainly because I’m not a huge Arnold fan. Toy Story will always be a “feel good” movie for me. Apparently I’m huge on nostalgia and the memories triggered.

Loey:  The thrill of Jurassic Park never wears off, but few cinematic experiences are as beautifully, emotionally satisfying as Return of the King. No matter how many fumbles Peter Jackson has made since then (lookin’ at you, Hobbit love triangle), he’ll always be the man who brought Middle-Earth to life.

My Vote:  The Lord of the Rings:  The Return of the King

Liesbeth: Let me just remember…The Return of the King…is that the one where they’re in a gnome city and their trapped in a dungeon and they have to escape riding on some barrels?  Oh, that was The Hobbit?

I think the Jurassic Park is definitely more memorable for me.  There are too many things going on in the Lord of the Rings, I can’t keep track of it.  I’m going to go Jurassic Park–I feel like I can wrap my ahead around it.  I think Lord of the Rings has too many threads going on in it I can’t keep it straight.  I suspect that every time I’ve watched it, I’ve fallen asleep.

I like Jurassic Park because even now if you watch it it’s still scary, in a jump-in-your-seat kind of scare, even though you know that these different people are all going to die.  I like the relationships between the people–I really like Sam Neill, and I think the kids are really fun in the film.  I don’t like any of the Jurassic sequels–they’re all terrible– but Jurassic Park is the classic that’s here to stay.

Robin: My precious! This movie had me interested and entertained from start to finish. And that’s saying a lot considering it’s 3+ hours and I’m a person who has troubles sitting still. Love it. Lord of the Rings: The Return of the King is my pick.

My Vote:  Lord of the Rings: The Return of the King

The Winner:   Lord of the Rings: The Return of the King

Kim:  This is a tough call because I like both films a lot, but I’m going to have to go with Saving Private Ryan. My reasons being are the following – 1) I cried in Saving Private Ryan because it’s a pretty powerful story 2) Tom Hanks & Steven Spielberg are a solid combo 3) Tom Cruise is just weird, so minus point for that.

Liesbeth:  Hmm…I enjoyed both the films, but I think I like Rain Man better.  I think it’s the first time I’ve ever seen a film about someone with autism.  I like the fact that Raymond was smart enough to know something about the world outside the USA–that QANTAS was the safest airline in the world, that he knew about the world–it felt like a smarter film to me than a film that ‘s completely centered on America.  I really like the relationship between the two brothers.

Beth:  Neither of these movies deserve to win this tournament. Saving Private Ryan lost the Best Picture Oscar to Shakespeare in Love for crying out loud. Nobody actually enjoys this movie we just think we should because of Hanks and Spielberg. What we have here then, is a fight for “Miss Congeniality”. So, the pivotal question is, what would Sandra Bullock do? Well, Sandra played Sally Owens in the 1998 hit (?) Practical Magic. Sally’s sister, Gillian, was played by none other than Our Nicole. Kidman, as we all know, was married to the confusingly charming Tom Cruise. So the answer is clear.

Loey:  The Avengers kicked the MCU into high gear, which laid the foundation for the mind-blowing, groundbreaking brilliance of Black Panther. Wakanda has come to symbolize something much greater than a comic book fantasy, and that would set it apart even if it wasn’t as good as it is. Plus: Battle rhinos!

Kim:  Both films offer likable characters, thrilling fight/battle scenes, great bad guys, and decent visual effects. You can’t have Black Panther without the success of The Avengers. Not to say that just because The Avengers open the door for the whole wide MCU that it is, therefore, the better film…but The Avengers is a culmination of so many stories, and audiences are rewarded with a film that brings those stories together in a seamless and exciting way. Black Panther is a stand-alone good film, but part of this bigger narrative that is tied to and leans on The Avengers film.

My Vote:  The Avengers

Beth:  I think this is a great time to reflect on the false paradigm of this tournament. It asks which of these box office juggernauts is the best. But who says that, just because a film made lots of money, it’s worthy of “best film” discussions? Enter–the MCU. They’re fun times, they’re exciting to talk about. But are they actually great movies? If either of these films wins, humanity loses.

My Vote:  The Avengers

The Winner: The Avengers 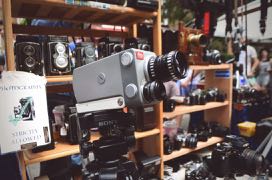 And again we’re down to the Final Four!  Three out of the four films that remain are the same as before, but the one that’s missing was the one that won last time, so it’s anyone’s game!

The next set of match-ups will be:

One thought on “(Alternate) Box Office Blockbuster Tourney: Round Three”