Master was the 49th entry in Big Finish’s “Main Range” or “Monthly Range” of Doctor Who audios (released back in 2003), that were part of a run of four stories which starred the four Doctors that Big Finish had access to at the time, and which were each named after one of the franchise’s major villains: Omega, Davros, Master and (original to audio) Zagreus. The releases were part of the celebrations for the show’s 40th anniversary. This time around Sylvester McCoy stars as the Seventh Doctor, traveling without a companion, and Geoffrey Beevers co-stars as the Master, a role he had played on TV in The Keeper of Traken and then at least in one audio story before this one (Dust Breeding).

END_OF_DOCUMENT_TOKEN_TO_BE_REPLACED

Doctor Who – All The Years is a quick examination of what was happening in the world of Doctor Who over all its years of existence. I’m not attempting to create a thorough history–just brief look back at the real-life timeline of my favorite TV show. Go back to the beginning and read about 1963 here.

END_OF_DOCUMENT_TOKEN_TO_BE_REPLACED

Lately, I’ve been doing a few posts here and there talking about the connections between Doctor Who and other properties–namely where the different programs have shared actors or production personnel. I’ve been curious to look into The Hitchhiker’s Guide to the Galaxy with this lens.

END_OF_DOCUMENT_TOKEN_TO_BE_REPLACED

Apropos of nothing, I’ve been looking from time to time at what connections to Doctor Who can be found in other popular TV shows. As I mentioned recently, there is a lot of obvious overlap between the fandoms of Doctor Who and that of Red Dwarf. At least, I assume as much given that they are both British and science fiction TV.

END_OF_DOCUMENT_TOKEN_TO_BE_REPLACED

And so the first “season” of Fourth Doctor adventures from Big Finish comes to a close with this “two part” adventure.  In reality, each of these “parts” is made up of two episodes, and so this story is the only one from this run of stories which is actually the same length as most of the Fourth Doctor’s actual TV adventures.

END_OF_DOCUMENT_TOKEN_TO_BE_REPLACED 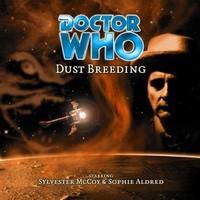 Dust Breeding continues the trends of these Big Finish audio dramas of taking real world historical events and re-imagining them with science-fictiony rationales and backstories.  For example, back in Storm Warning, we had the crash of the R101, and in Loups-Garoux there was the trial of Pieter Stubbe.  This time around, we have the painting of the Scream by Edvard Munch.  The work of art proves to be the result of a primal, celestial scream let out throughout time and space by an ancient weapon with the unimaginative name of “The Warp Core” that was created to deal with horrible biological monstrosities called the Krill who the newly re-disfigured Master (who is still really into the whole anagram thing – “Mr. Seta”) is resurrecting in order to both waken and weaken the semi-dormant Warp Core in order to use its power seize control of the Universe! END_OF_DOCUMENT_TOKEN_TO_BE_REPLACED

The 50th Anniversary of Doctor Who just around the corner and Big Finish, a company that have been producing original Doctor Who audio dramas for years, has celebrated by releasing their “50th Anniversary” story a  month early, on October 23.  I saw an add, I believed the hype, I spent a bit of money I recently received from my mother, and I bought the digital download (received,  I kid you not, because it wasn’t my birthday). END_OF_DOCUMENT_TOKEN_TO_BE_REPLACED