The Avengers, before they were Marvel superheroes, were light-hearted spies on British TV.  Dapper agent John Steed, played by Patrick Macnee, had numerous partners over the show’s run, but the most famous of these was scientific genius and martial arts expert Mrs. Emma Peel, played by Diana Rigg.

Now, in addition to commenting on the episodes, I’m also mentioning the notable (for me) writers and guest cast, particularly when they’ve been involved in Doctor Who.  There’s no real reason for this except Doctor Who is pretty much my favorite show, and so far there seems an awful lot overlap with The Avengers.

From Venus With Love

Season 5 of The Avengers hits, and the series,  I guess, will never be the same again!  The show has shifted into color and with that the whole look has been overhauled.  There’s a new pre-title introductory sequence where Emma shoots off the cork of Steed’s champagne bottle, followed by a new title sequence, followed by an opening murder scene that culminates with the episode’s title and a new gimmick where a little couplet is added to the title (see above), and then by a new gimmick where Steed “summons” Emma into action by delivering to her in a needlessly playful way a little card that says, “Mrs. Peel We’re Needed!”  I knew that was a catch-phrase for the show, but I didn’t realize that it seems to not have been spoken aloud,  but rather was just written on Steed’s fancy little calling cards (at least if this disk is anything to go on).

After all that, the episode finally gets going.  In this case it’s all about a series of strange deaths–the members of a astronomy club who are convinced of a forthcoming invasion from the planet Venus, who are all being killed off while viewing the planet.  Each one is a quirky character who we get to know a bit before they die in more or less the same way, which makes the episode a bit repetitive and a bit of a disappointment.  Specifically, the chimney sweep, Bert (inspired no doubt by Bert from Mary Poppins) and Brigadier Whitehead are actually a lot of fun, and it’s a bit disappointing to have them killed off in pretty much the same way  as everyone else.  On top of that, it seems to take forever for Steed and Emma to actually learn anything about what is going on–for much of the episode’s run time in just seems like they are chasing their tails.

Of course, even though The Avengers got quite fanciful at times, there isn’t actually an alien invasion going on , and thank goodness because the effects that are supposedly representing this look pretty silly.  The revelation that it’s all a mad scientist with a special laser beam works fine in a series like this, even if laser beams don’t really do any of the things they are said to do in this episode.  Still, it’s a novel episode, and there’s a bit fun guessing who the main villain is.

A couple of other notes–Emma is introduced in this episode fencing, which is also how we first saw her in her first black & white outing, back on Disk One of this series.  Also, the title of this episode is stylized so that the “o” in “Love” is written as a little heart, so it looks something a little like this:  “From Venus with L♥ve.”  I think that’s funny.

Barbara Shelley, who plays Venus, appeared in Doctor Who alongside the Fifth Doctor in Planet of Fire.  She also showed up in the unofficial Doctor Who-related direct-to-video production, More Than A Messiah.  Philip Locke (Primble) also appeared with the Fifth Doctor, in the Doctor Who story Four to Doomsday.  Derek Newark (Crawford) appeared in two Doctor Who serials—with the Third Doctor in Inferno, and with the First Doctor all the way back the show’s first serial, starting with the second episode of the story usually grouped together as An Unearthly Child.

Jeremy Lloyd (Bertram Smith) is better known as a writer–he wrote a lot for the comedy series Are You Being Served? and was one of the producers and writers for ‘Allo ‘Allo.  He obviously was also an actor, including in uncredited roles in the first two Beatles movies, A Hard Day’s Night and Help!  Arthur Cox (Clarke) appeared on Doctor Who twice–once in the original series and once in the revival.  He was with the Second Doctor in The Dominators, and with the Eleventh Doctor in his debut story, The Eleventh Hour.  Michael Lynch (Hadley) also appeared on Doctor Who twice, with the Second Doctor in The War Games, and with the Fourth Doctor in Genesis of the Daleks–both times in small roles.  Kenneth Benda (Mansford) appeared in just one serial, The Claws of Axos with the Third Doctor.

Also appearing in The Claws of Axos, Inferno, and every other Doctor Who story which featured the Third Doctor, was Jon Pertwee (Brigadier Whitehead), because he was the Third Doctor.  He starred in the show from 1970 – 1974, and made his last “canon” appearance as the character in the 20th anniversary special The Five Doctors, although he’s sneaked in a number of unofficial or out-of-continuity appearances elsewhere.  He was also known for playing a friendly living scarecrow, the title character of the TV series, Worzel Gummidge. 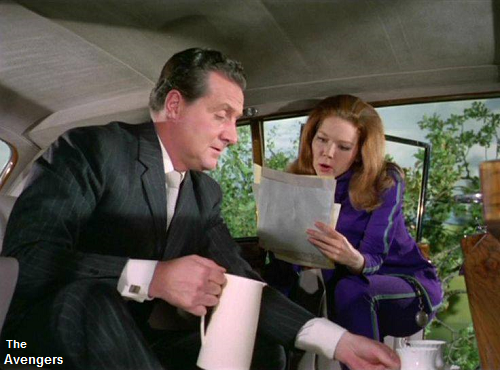 Steed puts out a light
Emma takes a fright

I love this show, but I have to admit it can feel a bit formulaic.  Lately, the formula seems to revolve around the weird but repetitive ways characters are killed off.  It happens in the above episode, and it’s true again here:  someone dies right at the start.  Then immediately after Emma and Steed get involved, someone else dies.  They investigate that victim, and we are generally then introduced to more future victims, in greater detail. And of course, all the murders happen in weird and wonderful ways.  Enjoyment of individual Avengers episodes comes down almost entirely to much you can accept the villain-of-the-week’s bizarre mode of operation.

This time around the bad guys are trained psychologists who use the victim’s deepest fears against them.  This is a cool idea but it’s cheapened by the fact that all their enemies seems to have abnormally intense phobias of simple things–including, say, mice, or birds, or spiders.  These fears are so potent that their victims will lose all self-control if they come into contact with the wrong thing unexpectedly, and will invariably die or revert to a fugue-state.

This is all too bad because I quite like the villains, with their creepy gazes and odd glasses.  If the way they used fear was somehow more deeply thought out, or more psychologically interesting, one feels it could have been a stronger episode.  Certainly, if at any point Steed and / or Emma had been forced to face their fears or run a gauntlet of things that terrify them, that would have elevated things.  As it is we just have some bad guys who are killing people in some of the most convoluted ways possible.

Of course, the other appeal for The Avengers is Steed and Emma themselves, and Patrick Macnee and Diana Rigg are as full of wit and charm as they ever are.  And there are other good things–the villains have got an interesting look, and there’s a pretty gripping action sequence with a quarry and a front end loader that forgets to put on its emergency breaks.  There are some interesting directorial touches as well, including a shot of White appearing “in a cage” while being terrified by a bird, and also a strange fake-out where we think we’re behind Steed for a moment, only for it to be revealed to be someone else who resembles him when the real Steed suddenly shows up coming the other direction.

But I don’t think that’s enough to make me like The Fear Merchants very much.  The villains are ultimately defeated in a rather pedestrian way–thanks to a fear-based vulnerability that is not really set up very well.  The story also introduces a clever trick on the part of the bad guys with a chair rigged up to a lie detector, but it doesn’t really go anywhere–it’d have been better if Steed or Emma had been seen to outwit it somehow.  And finally there seems to be more than the average number of lascivious moments with Emma, including an annoyingly blatant butt-shot and an outrageously scandalous outfit that she seems to be wearing when she’s hanging out in her apartment sculpting.

Annette Carell (Dr. Voss) showed up as “B” in the episode of The Prisoner called A. B. and C.  Garfield Morgan (Gilbert) played a slave master in a couple of episodes of The Tripods back in the 1980’s.  Declan Mulholland (Saunders) appeared in Doctor Who–with the Third Doctor in The Sea Devils, and the Fourth Doctor in The Androids of Tara.  Edward Burnham (Meadows) also appeared twice in Doctor Who–once with the Second Doctor in The Invasion, and with the Fourth Doctor in Robot.  He and Jeremy Burnham (Gordon White) are apparently brothers.

Andrew Keir (Crawley) was Wyler in the Doctor Who movie–Daleks Invasion Earth 2150 AD. The episode’s director, Gordon Flemyng, also directied that movie and its predecessor, Dr. Who and the Daleks. 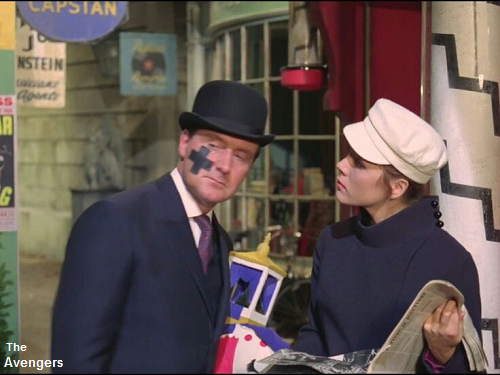 Steed visits the barber
Emma has a close shave

OK, talk about outrageous and convoluted plans!  Escape in Time certainly has one of the wackier villainous plots that we’ve had even a show like The Avengers. An ambitious guy named Thyssen lives in a huge ornate castle, and uses his resources to offer rich fugitives the opportunity to escape their pursuers by traveling back in time.  There, they will find  one of his ancestors who will help them integrate into their new worry-free life.

In reality, of course, it’s all a scam to steal the client’s money.  Thyssen simply like dressing up, so he pretends to be his various forebears and meets up with the travelers in areas of the castle that are decorated in a period-specific manner…and murders them!

It soft of makes sense, I guess.  The victims won’t hand over their money if they are not convinced, so he Thyssen does have to employ all the theatricality necessary to make the time travel seem legitimate.  But once that money is delivered, then the time travel charade seems unnecessary…unless Thyssen is just crazy.

In the end that might be the answer.  Fortunately, Peter Bowles (last seen playing a different bad guy in in Dial and Deadly Number) is on hand to give Thyssen a lot of personality and make that insanity seem plausible.  Unfortunately, beyond that, the two lead’s normal charm, and the unusual gimmick or the episode, it doesn’t have a huge amount going for it.

The town set-piece is that is used extensively in the early parts of the episode is not realistic, and the staging of the sequences of Steed and Emma following the various people around is not terribly convincing (and a little dull).  Steed has a fight in the “past” that is sillier than normal, and for no particular reason, Emma struggles to hold onto a stuffed crocodile while she’s avoiding being killed by a marauding motorcycle rider.   And though Emma’s fight with Thyssen at the end is pretty well done, the whole scene with her about to be tortured is awkwardly paced

Actually, I remember watching this episode as a kid.  I remember at the time thinking that Steed’s line at the end, “Aren’t you a bit ahead of your time?” was really funny.  Seeing it as an adult, though, it’s lost a lot of its sheen.

Peter Bowles is a popular British actor of mostly comedies, including in To the Manor Born, Only When I Laugh, The Bounder, and more.  He also appeared in the Doctor Who spinoff, The Sarah Jane Adventures.