In the wake of the whole COVID-19 pandemic, Big Finish–most famous for their original. licensed Doctor Who audios–began to release a variety of projects for free on a weekly basis.  Some of these are “proper” Doctor Who adventures, some are licensed from other sources, and others are completely original.  I, of course, have been taking advantage of these.  This time around we’re looking at some portions (generally, the first episode) of straight-up adventures of the Doctor himself.

Big Finish has been pretty generous with all this free product, but each one also serves as a sampler to tempt me to buy other material.  Do they work?

Doctor Who and the Star Beast – Episode One

Line:  Doctor Who – The Comic Strip Adaptations – Volume 01
Length:  28 minutes
Buying Price:  I don’t think you can still buy only this sample episode anymore, but the full package of two stories (it doesn’t specify how many episodes each but based on runtime it might 10-12) is AU$29.99

Comments:  There is a long history of Doctor Who in comics.  Doctor Who and the Star Beast was originally serialized over eight issues of Doctor Who Weekly in 1980, and here as part of Big Finish’s willingness to do anything and everything, it is adapted for audio.  I haven’t read the story but I have tried to read Doctor Who comics from that era, even before I really knew the series, and I always had trouble getting into them.  It’s a bit surprising because I like both Doctor Who and comics, but the plotting and characterization I’ve seen seem to be the worst of both worlds.  We get crazy science fiction stuff combined with an off-beat hero, but without the benefit of the performances of someone like Tom Baker to ground it and give us a connection point.

Now with this adaptation we do have Tom Baker, which is always nice, but it doesn’t make it any more enjoyable to listen to as he has to push the silliness of his performance up a notch to keep up with the story.  That story involves a couple of teenagers in 1980’s London who meet up with a cute furry alien that they hide in an attic.   The cute alien is  being pursued by a giant spaceship which are full of cliched warriors.  The Fourth Doctor shows up on the spaceship rambling unconvincingly about maracas.  The cute alien says “Meep!  Meep!” over and over again in varying inflections, which I can imagine works in print but just sounds silly on audio.

In the end, I found the whole thing a chore to get through, with its, uninteresting characters, lame jokes and average-at-best plot.  Similar to listening to the audio adaptation of The Ultimate Adventure stageplay, it’s biggest appeal is really as a piece of trivial, more than as a story.

Does it tempt me to get more?  Clearly not.  I gather that later Beep turns out to be sadistic murderer which is a nice twist, but we don’t get that far in the first episode.  Maybe if we had, I’d have been more interested.

Line:  Doctor Who – The War Doctor (Volume 1, Episode 1)
Length:  67 minutes
Buying Price:  Not available individually, but it is part of the first series of three War Doctor adventures, called Only the Monstrous, for AU$24.99.

Comments:  In 2013, Doctor Who introduced us to the War Doctor, the show’s first and best introduction of a previously unheard of incarnation of the Doctor.  He only featured in the 50th anniversary special, but John Hurt immediately made an impression.  He’s such a good and celebrated actor, it’d almost be surprising if that weren’t the case.  Combine that with the fact that his “era” covers one of the most talked about but least seen periods in the Doctor’s life–the so-called Last Great Time War–and the opportunity to revisit the character becomes an extremely appealing prospect.

The story is about the Doctor (for lack of a better name–he insists nobody call him that, but he never offers an alternative) taking a year off the battlefield during the thick of the Time War.  It starts with him accidentally landing on a planet called Keska after suffering injuries pulling off a typically clever victory against the Daleks.  There he is befriended by a young woman named Rejoice who takes it upon herself to nurse him back to health.  There, the Doctor learns that Rejoice’s people are themselves retreating from a war and are in need of help, forcing him to face different qualities of himself, including his mission and his priorities.

The Innocent is a promising start to a series of War Doctor adventures, and is grounded in very strong character work thanks to writer / director Nicholas Briggs and actor John Hurt.  The situation brings out the Doctor’s character in a way that is consistent with the show’s history whilst still being completely fresh, and the relationship between the Doctor and Rejoice is as touching as any other that the franchise has given us.  In addition to Hurt and Lucy Briggs-Owen, who plays Rejoice, the story also gives us Jacqueline Pearce as Cardinal Ollistra, a Time Lord who ostensibly an ally of the Doctor but seems to be being set up as an eventual adversary.

Does it tempt me to get more?  Absolutely!  The story seems to be doing a great job  bridging the gap between Classic Doctor Who and its modern incarnation.  Actually, I’d wrongly hard that Big Finish was only able to make one War Doctor series before John Hurt passed away, but I’m pleased to find out there are actually four–twelve stories all together.  Not sure how quickly I’ll get them all, but if they keep us this quality I’m definitely excited for it.

Comments:  The Eight Doctor, played by Paul McGann, used to have adventures that were part of Big Finish’s rotating “Main Range”.  Then he branched out into his own “Eight Doctor adventures”.  Then they starting creating specially titled box sets of related stories featuring this version of the Doctor.  The first of these were Doctor Who:  Dark Eyes, four sets of four episodes each.  The first episode of the first volume of these was The Great War.

The audio finds the Doctor distressed and depressed over whatever happened in the previous story (I presume), and determined to visit the end of the time in order to find some evidence of hope in the universe.  Instead, he gets summoned by Time Lords and sent on a mission to France during World War I.  There he meets a no-nonsense Irish voluntary aid worker, Molly O’Sullivan, who I gather will eventually become his new companion, though she spends most of this episode being distrusting and suspicious.  Together they investigate a mysterious and deadly glowing gas, and run afoul of a sinister doctor who is really serving an unseen alien threat.

The Great War is a solid drama with a strong, immersive audio landscape.  However, it also has a vague and somewhat tedious opening 10-15 minutes or so–I really thought I wasn’t going to like the story at that point.  Fortunately, it picked up after that in a big way, creating some memorable characters and delivering some gripping action.  Paul McGann delivers a typically effective performance and Ruth Bradley is stands out as Molly O’Sullivan. The Daleks unfortunately turn out to be involved but appear in this story only minimally and thus are not really a distraction to things.

Does it tempt me to get more?  I didn’t think so at first, but by the end of the story I was sold.  Not that I can actually get it or any of these things right now, but I’d definitely like to hear more. 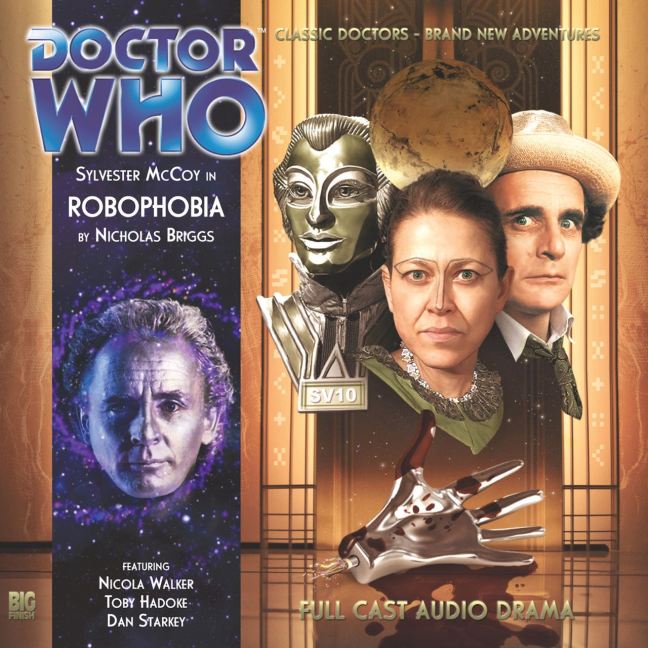 Line:  Doctor Who – The Main Range (1.1)
Length:  33 minutes
Buying Price:  Free!  Unlike the other stories in this post, this one is still available as a free download.  The full Robophobia story has four episodes, though, and if you want that it costs AU$12.99.

Comments:  One of the most celebrated episodes of classic Doctor Who is the story Robots of Death from 1977, featuring the Fourth Doctor.  In 2011, Big Finish released a sequel – Robophobia, as the 149th release of their Monthly Adventures range.  Similarly to the earlier story, Robophobia is set in a society dependent on robots for labour.  The incident aboard the Sandminer has been hushed up, and so the people are completely unprepared to deal with it when it appears that the robots are going bad. This time around the Seventh Doctor (played by Sylvester McCoy) is on hand to deal with things.  Assisting him is a medical technician named Liv Chenka (played by Nicola Walker), who later became a companion to the Eight Doctor.

It’s a gripping opening of a story, featuring the Seventh Doctor at his mysterious best.  This is accomplished largely by telling the story from the point of view of Liv and her colleagues, which helps the Doctor appear to be a sinister outsider, even to the audience.  Of course, this is just an old fashioned-style “Part 1” and ends on a big cliff hanger, so it’s impossible to judge the whole story, but it’s definitely promising.

Does it tempt me to get more?  Yes it does, and as a “regular” story the buying price is a lot lower than the others, so it’s also a bit more in reach.