A second season of Big Finish’s original Doctor Who audio adventures featuring the 10th Doctor kicks off with Infamy of the Zaross.  This time around, David Tennant appears with his original co-star, Billie Piper as Rose Tyler.  Co-starring in the first adventure only is also Camille Coduri, reprising her television role as Jackie Tyler, Rose’s mother.  Spoilers ahead. 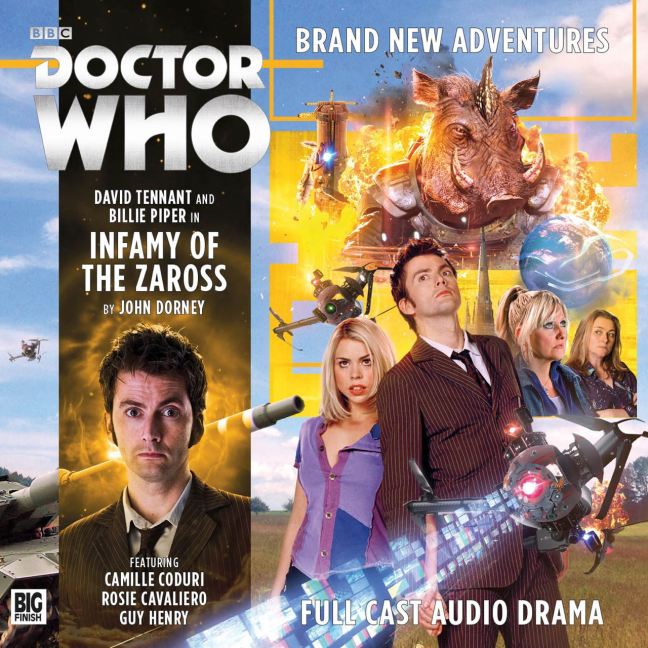 Infamy of the Zaross by John Dorney has a pretty cool story idea at its core–aliens called the Zaross appear to be invading earth, but in reality they are only invading one small city, and the Zaross themselves don’t actually exist.  It turns out that they are a different alien race who have been taken in by the lure of celebrity agreed to star in a reality TV show called Take Me To Your Leader, in which each series involves them invading and devastating some other species.  The Doctor and Rose get called in because Rose’s mother Jackie is caught up in the midst of it all, and they are rightly appalled and the senselessness of the killings taking place.  This leads to some funny stuff where the Doctor is facing down with the leader of the invaders and finds his opponent stymied because he needs instructions from his director.

The story attempts to make some comments about the meaninglessness of being a celebrity, but a subplot about a teenaged girl named Jess who is willing to do anything for her own “big break” ends up a bit confused.  It starts off with her just wanting to be famous, but the story takes a odd swerve when she is suddenly willing to betray the Doctor and even be killed if it means she will suddenly have the notoriety of dying young and tragically.  It’s a very heavy concept (basically, Jess is talking about committing suicide) which is brought up very lightly, and then addressed just as lightly with one pep talk from Rose.  A coda where Rose rudely tells Jess’ mother to “Shut up” because she talks her daughter down is even worse.  Rose babbles on about how brilliant Jess is and how amazing she’ll be at whatever she does, but it’s hollow.  She obviously means well and Jess’ mother is terrible, but Jess herself has done literally nothing in the story except whine and be willing to cause a whole lot of deaths if it just means she can get her way.

This is too bad because otherwise I quite enjoyed Infamy of the Zaross. 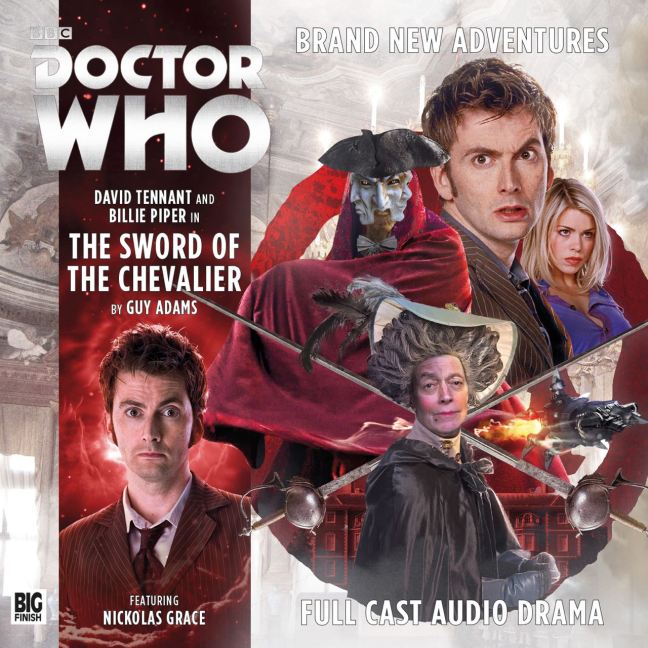 The second story is The Sword of the Chevalier by Guy Adams is my least favorite of the stories.  It’s an historical story featuring the Chevalier d’Éon, a real-life French diplomat and spy whose gender was a matter of dispute–at different times over his/her life, the Chevalier presented as both male and female. She’s a woman in this story (which takes place later in her life), and the story spends a bit too much time being enamored with her and her prowess with a sword, which gets a little tiresome.

The plot involves an alien menace who has also got something unusual going on as far as gender–Joxer and Hempel are two beings (one male, one female) who share a body.  Actually, there is also a third being in their body, but that one had previously died.  They each have a face and their own voice, which is the sort of thing that is hard to convey in audio without a whole lot of awkward exposition-filled dialog–eg, “What? But…but you have two faces…in one body!  How is that possible…?!” and so on.  They have a quirky plan to kidnap about 50 humans to sell as slaves and to kill all the rest to make them more valuable, but in the end they are defeated because they are culture-bound to obey without question any “superior” life forms, so once they learn that the Doctor is a Time Lord, they just sort of give up. 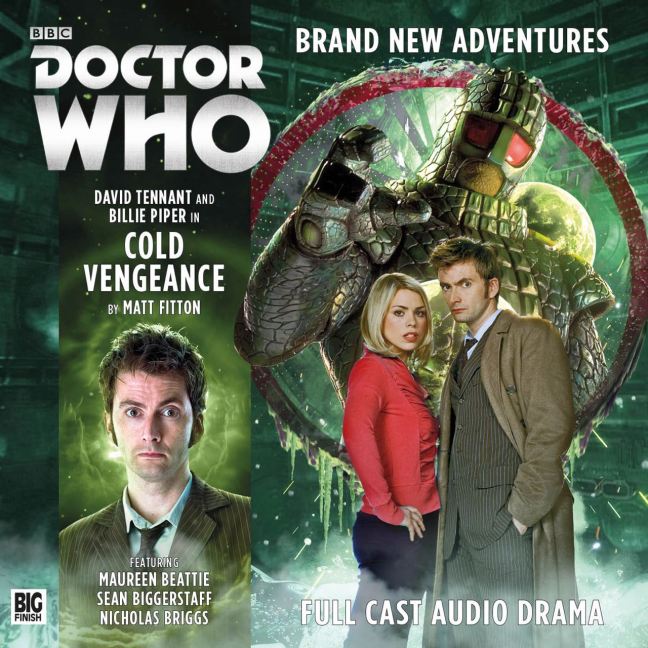 Somewhat more enjoyable is Cold Vengeance by Matt Fitton.  This time around the story takes place in Coldstar, a giant food freezer satellite, that some pirates are defrosting by way of holding the facility’s automated management hostage so they can steal really expensive space-caviar.  Unfortunately, Coldstar sourced their ice from a nearby planet, and along with the ice they’ve picked up a bunch of frozen Ice Warriors!

It’s not quite as daft as it sounds–according to the story, the planet is where humans centuries ago won a war centuries ago against Ice Warriors, thinking they were all dead–but some of them retreated to a hibernation state to survive.  Now they’re back, led by the embittered Ice Lord Hasskor…and they’re ticked!  They want revenge, and revenge, as we all know, is a dish best served…cold.

The supporting cast is underwhelming, but the adventure is pretty tight and enjoyable.  In general I like the Ice Warriors as villains from the TV show, but here they threaten to be a bit one-note until the end.  Then the story takes an interesting turn and reveals that some of the unfrozen Ice Warriors did survive after all, but as downtrodden refugees on the planetl Hasskor plans on destroying.  This serves the twin purpose of making the humans inhabitants not as innocent as the appear to be at first, and also compelling Hasskor not to go through with his plot after all.  It makes for a nice change of pace in the story’s final act. 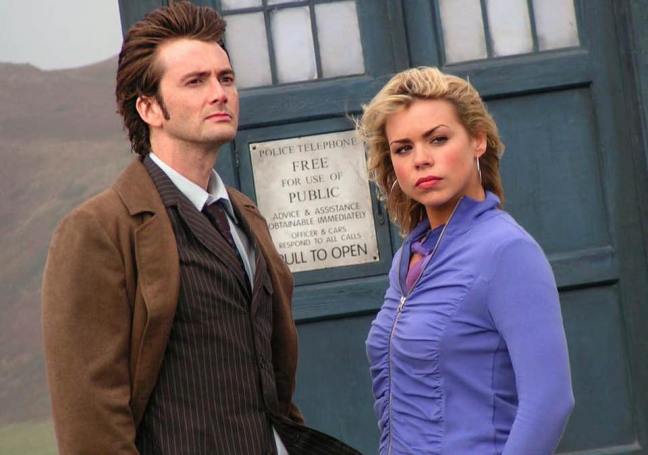 On the whole, the second series of Tenth Doctor audio adventures was enjoyable listening.  More More David Tennant-starring Doctor Who is always a big deal, and the actor brings his usual fast-talking manic brightness to each of the adventures.  Having said all that, I didn’t enjoy this set of stories as much as the first ones–this is at least partially because of replacing Donna Noble with Rose Tyler as the companion. I don’t mind Rose, precisely, but I certainly find her less fun to listen to than Donna.  This is especially true on audio–Catherine Tate does a lot more with her voice in her performance of Donna then Billie Piper does as Rose.  Piper’s performance was built a lot more around her eyes, mouth and posture, none of which translate strongly onto audio.

Meanwhile, Rose’s actual story from her time on the show was built around her growing love for the Doctor, but this is not touched on here at all.  It all results in her being a fairly generic character.

In spite of that, none of that is genuinely bad.  It’s a series of three decent stories which for the most part slot nicely into David Tennant and Billie Piper’s one TV season, back in 2006, complete with even a brief “Torchwood” Easter egg.