Not long ago, I turned 50 years old!  And to add to all the real life goals and challenges that that brings, I’ve created at least one as it relates to movies and this blog–watch a film I’ve never seen before which cam out in each year of my life (thus the “Old-New” terminology), and then write a bit about it.  This is Post #6.  Spoilers ahead. 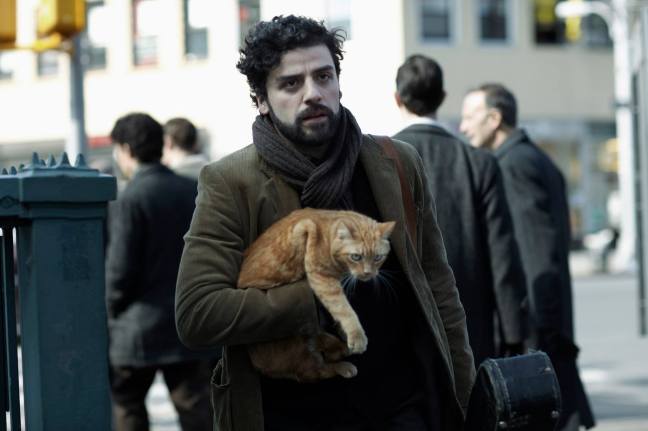 What it is about:  Llewyn Davis is a New York folk singer in the 1960’s who struggles to manage his career, his relationships and ultimately his life.  Over the course of a week he is beset by a number of problems, including looking after a friend’s cat that he has accidentally become guardian of, finding money to pay for an abortion for a married friend with whom he had an affair, and getting to Chicago for a hoped for musical opportunity.

My impressions of this movie before I watched it:  I knew it was a Coen Brothers movie and that it seemed to have been well received, but that was about it.

Reality:  According to Wikipedia, Joel Coen once said, “The film doesn’t really have a plot.  That concerned us at one point; that’s why we threw the cat in.”  This is actually a reasonable indicator of what you’ll get with Inside Llewyn Davis–the story just goes somewhat arbitrarily from situation to situation, in a similar way that Llewyn goes from sofa to sofa to find a place to sleep.  The glue to this all is that pretty much all these encounters end up working against Llewyn.  Sometimes he’s brought down by bad luck, but mostly it’s by his own poor choices.  Either way, it becomes resoundingly clear that in every important respect, Llewyn is a loser.

Indeed, the film actually begins with Llewyn getting beaten up a back alley outside a club that he’s just played a set in.  It’s not until the end of the film that we finally understand why this has happened, but when we get the reveal, it’s intentionally underwhelming.  It’s just another thing in the life of Llewyn Davis.  The fact that the scene is shown twice makes the repetitive nature of his life all the more clear.

But in the hands of filmmakers skilled at communicating mood and tone as we have here, the result of this is not depressing so much as it is profoundly melancholy, something which also ends up being quite beautiful to watch, with a lovely and bleak brownish palette.

It’s also a nice film to listen to, with a lot of nice folk songs which help to articulate the mood.  Oscar Isaac (now popular as the galaxy’s least consistently characterized resistance fighter, Poe Dameron) does a great job as Llewyn, and gives a good musical performance as well.  He and his fellow singers performed their music live, without lip-synch, which I think always adds an authentic quality to the musical scenes.  The music was produced by T Bone Burnett, who also did the music for O Brother, Where Art Thou?, another Coen Brothers movie for which music played an important role.

The movie is also funny.  One of the most memorable bits is when Llewyn helps to record a quirky novelty song about an astronaut pleading with President Kennedy to not be shot into space.  And there’s also the bit with the cat that was mentioned earlier–Llewyn accidentally lets it out of the apartment he is staying in.  He recovers it, but then gets locked out and winds up being responsible for it as he travels across New York City on a subway.  Llewyn trudging through the gray city landscape holding this complacent cat is just the sort of quirky image that the Coen Brothers excel at. 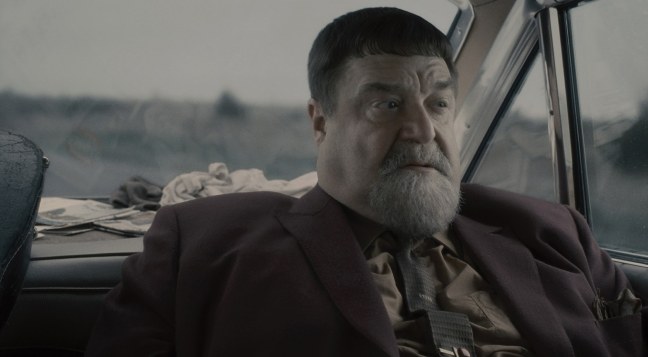 There’s a very interesting cast on display here.  Oscar Isaac’s co-stars include Carey Mulligan, who is a famous movie star but I mostly know from the Doctor Who episode Blink, plus Ethan Phillips from Star Trek Voyager, Garrett Hedlund from Tron Legacy, John Goodman from a lot of other Coen Brothers movies, and Adam Driver, who appears with Isaac in the recent Star Wars movies.  Driver is especially funny as one of the singers in the Please Mr. Kennedy song sequence mentioned before.

So…when you get down to it, what did I think?  This is only the sixth film in this series, but so far it’s my favorite (in spite of an excessive amount of swearing). In a lot of ways, it’s like one of the folk songs that Llewyn sings–lovely to listen to, but a bit sad.