We are voting on  Tenth Doctor Doctor Who stories starring David Tennant, pitting them against each other in an elimination tournament, with whichever story gets at least two out of three votes from our judges will move on to the next round. The judges will be myself and two of my daughters–Johanna (14, at the time we took these votes) and Laurelle (13).  The stories have been seeded according ratings on IMDb, and randomly broken up into two conferences–the Newman Conference and the Lambert Conference. 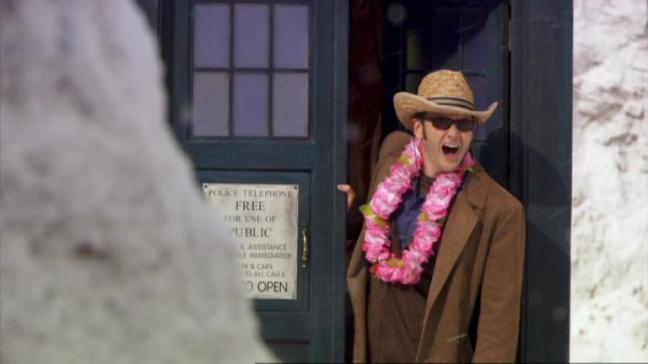 Read all about that process and the first round, starting here.

Right now, we’re going to continue things with the second half of Round Two, in the Lambert Conference.

Johanna:  I’m going to vote for Blink, because while the Christmas Invasion had that one awesome scene where the new Doctor is raving about “not knowing what sort of Doctor I am yet, but I think I’m the kind who will press this big red button,” and then he goes and presses it but no one dies.  That was really cool, but Blink was really fun to wtach.  It wa really scary and had an interesting plot, and some interesting guest stars who I actually cared about whether they died or not.  I really liked it. The other one was…okay-ish.

Ben:  I really like about half of The Christmas Invasion–pretty much all the parts that David Tennant is actually in, and all the parts that don’t include spinning Christmas trees or alien Santas with machine gun brass instruments.  But the good stuff just can’t hold a candle to Blink.  There is a cleverness to the concepts, a strength to the characterization, and an economy to the storytelling that has rarely been accomplished in Doctor Who, or anywhere really.  There a few logical inconsistencies, of course, and it suffers a bit from over-familiarity, but it’s still the clear winner.

Laurelle:  I have to say Blink.  It’s very tense, interesting and scary, and I liked it.  I liked the part where the Weeping Angels were shaking the TARDIS.  It was scary and I liked it.  In the other one I liked the bit with David Tennant being cool at the end, but I found the Christmas trees to be kind of strange, and the same with the Santa Claus’s–they were in that episode too, right?  It was just kind of silly.  And I liked Blink a lot. 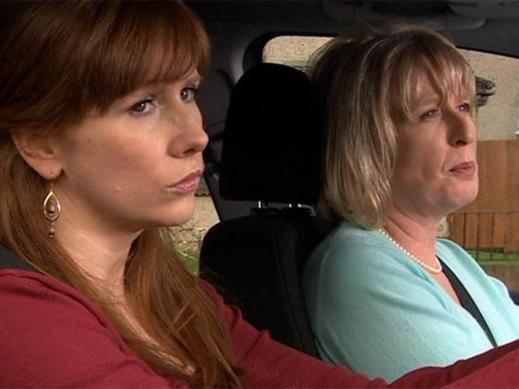 Johanna:  Midnight.  I liked Turn Left–it was fun, but Midnight was just completely terrifying.  Completely terrifying and really cool, and fascinating; not so much fun but really scary…really really scary.  That was basically it.  They did really well.  It was super tense and scary without ever feeling really dumb…which Doctor Who can do sometimes.  Sometimes it can be really dumb.

Ben:  As much as I appreciate the cleverness and continuity of Turn Left, I’ve always been annoyed by the shallowness of explanation for Rose’s presence, and the arbitrary nature of the final twist (the whole Bad Wolf callback).  Midnight, on the other hand, I consider to be a bit of masterpiece–innovative and gripping in the way it takes the Doctor’s strengths and turns them against him.  It’s the best thing Russell T. Davies ever wrote for the show.

Laurelle:  I vote Midnight.  I like Midnight more, it was very good and I liked it.  I liked the Doctor being in this situation and nobody’s listening to him, and everyone thinks he’s the bad guy and they’re going to throw him off the bus.  And I liked that creepy lady who is copying everybody.  I found Turn Left interesting too, but it wasn’t too good.  I liked that Rose was in it, but I found annoying at the end that nothing that happened in the episode actually mattered at the end.  Like, “Oh, it was all a dream.” 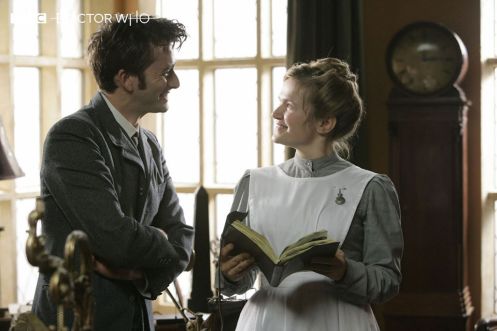 3. Human Nature / The Family of Blood

Ben:  Human Nature and its second half contain my favorite performance by David Tennant for his entire era.  He makes John Smith into a deeply affecting character, and his relationship with Joan Redfern is as compelling as any other the series has offered.  Waters of Mars delivers on the creepies, of course, but the ending–although an interesting idea–doesn’t really deliver on its premise.

My Vote: Human Nature / The Family of Blood

Johanna:  Okay, I don’t know why…but for some reason I didn’t really like Human Nature / The Family of Blood.  It’s possible because I watched them out of order and I got really confused by Martha’s entire existence.  The plot is interesting, but I don’t know why–I didn’t really like it.  The Waters of Mars wasn’t brilliant but it was interesting to watch the Doctor try to save these people and then being told by that lady, who says “Who are you to say whether or not they are important?”  It was fun.  Weirdly fun, but fun.

My Vote:  The Waters of Mars

Laurelle:  I’d say Family of Blood–I very much enjoyed the episode.  It was one of the first new series episodes I watched, and that might be making it better in my mind.  But I liked it, I liked the bad guys in it, and I liked John Smith–his having to make the decision to turn into the Doctor again.  In Waters of Mars, I liked the thing about the Doctor saving those people he wasn’t supposed to.  But actually I don’t remember the episode that well, which doesn’t say much about it.

My Vote:  Human Nature / The Family of Blood

The Winner:  Human Nature / The Family of Blood

My Vote:  I am voting for The Stolen Earth.  I found the other one very annoying and tiring, and just so frustrating.  For starters, the Master eats someone at the beginning of the episode, with laser vision.  He laser visions someone and eats them.  I’m not even sure how he did that…how did he have laser vision?  (Continues to rant against End of Time for a while).  The other one was super-sad and super-fun.  Donna was my favorite and then she left in what to this day is the saddest companion exit I’ve seen so far.  It was just so sad.  I’m definitely choosing Stolen Earth.

Ben:  The Stolen Earth / Journey’s End is a bit of glitz and sparkle–a crowd-pleaser with some wacky ideas on offer in order to wrap up everyone’s storylines (hello there, meta-crisis Doctor and conveniently semi-happy ending for Rose).  The End of Time, on the other hand, has some good stuff but it takes an awfully long time to get to it.  I dislike almost everything about John Simm’s Master, and this story was the worst of it.  The return of Gallifrey was more interesting and should have had a whole episode behind it, rather than just the last act of the story.  I liked the whole regeneration sequence as well, but it’s not enough to win.

Johanna:  I can’t remember heaps about Stolen Earth, but I remember I liked it.  And I remember with End of Time, I found it really strange that the Master just turned everybody into himself.  It was weird, and that Master isn’t very interesting.  I liked finding out that the one character was actually the Time Lord guy (Rassilon).  But I think the other one is better. 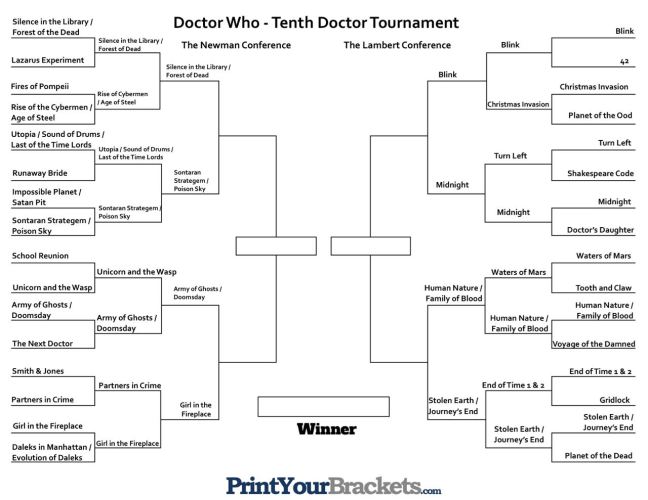 Next voting is here!

One thought on “Doctor Who: The Tenth Doctor Tournament – Lambert Conference – Round Two”