A story that is built on the idea of 1980’s nostalgia, Cuddlesome features a fictional toy trend (along the line of Cabbage Patch Kids or Beanie Babies) which in typical Doctor Who style are actually alien murder machines.  This is all confronted by the 5th Doctor as played by Peter Davison, in a rare companion-less story which was released as a bonus CD with an issue of Doctor Who Magazine back in 2008. 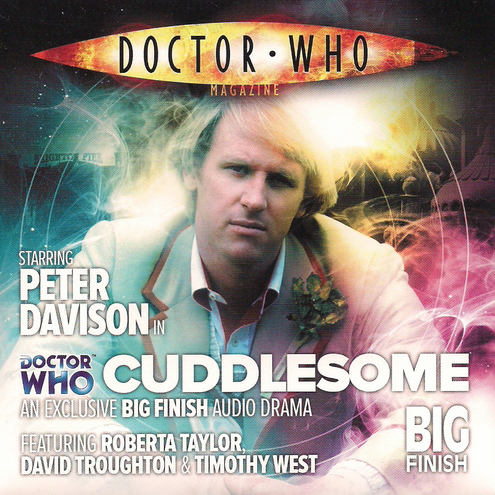 The story features the Doctor coming face to face with an army of Cuddlesome toys that have suddenly come to life decades after their popularity, and begun to infect their former owners with a mysterious virus.  These toys are the result of a bizarre blending of minds between an emotionally distressed scientist / toy designer, and a malevolent alien parasite which begins its life as a bitter, hateful thought.  In the decades since the  dangerous toys were created, the two have diverged in their methods, and now the alien has created a second line of updated (and more gaudy) Cuddlesomes to replace the originals.  And so the story proceeds, with a war between different generations of merchandise who are both intent on devastating the human race.

The plotting is pretty tight, and the production is well done, but also kind of annoying.  All the way through we have to listen to the Cuddlesomes themselves, which are annoying in both of their incarnations.  This is sort of the point but it’s still annoying.  However, the story is satisfying and the perfomances are strong.  David Troughton is good (son of 2nd Doctor Patrick) as the alien intelligence, and Timothy West does a strong job as Turvey, the Cuddlesome’s original creator.

But the standout is Roberta Taylor as Angela Wisher, the fill-in companion for the story.  She is an ambiguously-aged woman whose partner John becomes an early victim of the Cuddlesomes.  She has a great interaction with Peter Davison’s Doctor, and her character is nicely used to nice draw out the themes of the story.  These involve the whole idea of the failure to actually grow up.  It’s Turvey’s inability to genuinely mature into an adult which allows the alien to gain its foothold on earth, and this is mirrored in the awkward “mothering” relationship Angela has with the immature John.  Angela’s personal growth at the end of the story is a nice indicator of what all this has been about.