The Avengers, before they were Marvel superheroes, were light-hearted spies on British TV.  Dapper agent John Steed, played by Patrick Macnee, had numerous partners over the show’s run, but the most famous of these was scientific genius and martial arts expert Mrs. Emma Peel, played by Diana Rigg.

Thanks to Christmas, I recently picked up The Complete Emma Peel Megaset DVD collection, including all of her episodes over a couple of seasons, starting in 1965, and I’m commenting my way through him.  Today, we’re doing Disk Three.

Now, in addition to commenting on the episodes, I’m’ also mentioning the notable (for me) writers and guest cast, particularly when they’ve been involved in Doctor Who.  There’s no real reason for this except Doctor Who is pretty much my favorite show, and so far there seems an awful lot overlap with The Avengers.e

The Murder Market is a peculiar episode – even though it comes 7th in the DVD collection, it’s actually the first episode that Diana Rigg ever filmed.  Apparently, they were partway filming with another actress as Emma Peel–Elizabeth Shepherd, whom I’ve never heard of–when she was fired and Rigg hired as a replacement.  Perhaps as a result, it’s a slightly clunky affair, with Emma displaying a bit less of the poise and grace that she came to be known for.  Apparently, the bit where Emma chides Steed for failing to prevent a death was very reminiscent of Cathy Gale (Emma’s predecessor on the series), although I haven’t seen enough of that era of the show to say for sure. The notable exception is the scene where she plays the tuba, something that apparently came about in part due to an improvisation on set by Patrick Macnee (apparently, he was supposed to be playing the tuba).  The interaction there between Steed and Peel is gold.

The plot is typical Avengers-style wacky, with it all being about how a service to find marriage partner’s for rich people also doubles as a service to find a stranger who was willing to kill someone you hated.  It seems like a wacky business model–surely it would just be simpler to hire out hit-men and assassins, rather than to find people who 1) wanted to get married and 2) also had motive to kill someone and 3) were willing to have that person killed and 4) were willing to kill someone else as payment for that service.  But if there’s anything we’re watching this show for, it’s not for storylines that hold up under great amount of scrutiny.

And there are some good parts to the story.  The revelation that the widow from the beginning is actually the brains behind the operation is a good one.  The photographer character is hilariously insane.  The fish tank bullet holes during the first murder are a stylish touch.   And the fight that Steed has with all the wedding paraphernalia is funny (this episode is also the second time I’ve seen Steed disguise himself as a mannequin).

Incidentally, though Steed and Mrs. Peel are decent detectives, they seem to be pretty bad spies–they get into all sorts of trouble this episode because they don’t take care to keep a low profile.  I doubt it’s the first time and it’s definitely not the last time this happens.

Some other observations:  Steed talks to Emma about getting married again, which is the first reference that the show has had to the fact that she was married, other than the fact that she’s Mrs. Peel.    The woman who works at the wedding service is really awkward looking  and would definitely make me uncomfortable about doing business there.  Also awkward is the strange death grip that Steed has with Walter, and Emma’s “caged animal” stance that she takes on when she’s about to fight.  I wonder if that’s an acting choice by Diana Rigg, or if it’s actually part of some fight training she had.

Patrick Cargill plays Mr. Adrian Lovejoy–he was in a couple of episodes of The Prisoner, including as Number Two in Hammer Into Anvil.  John Woodvine (Robert Stone) was in a Fourth Doctor Doctor Who story called The Armageddon Factor.  He also played Martin’s father in one episode of Doc Martin.  The last credited role for Edward Underdown (Jonathan Stone) on IMDb was on Doctor Who as well, in the Fourth Doctor adventure Meglos.

Also, since this is the first episode Diana Rigg filmed, I thought I should take the opportunity to point out that she too was in Doctor Who once, relatively recently with the 11th Doctor, where she was a villain in The Crimson Horror.  She had a chance there to act against her daughter Rachael Stirling, who was actually playing her daughter.

Hmm, “surfeit” is a word I am unfamiliar with.  From the context I assume it means “an overabundance”.  Let’s see…checks internet…”an excessive amount of something”.  Pretty much right.

Anyway, here is an episode which begins with someone being rained to death.  Not killed because they are trapped in a flood.  Not killed because they catch a severe chill from being exposed to the elements.  No, they are just pounded to the ground by sudden and brutal rain, until they are overcome and drowned by the water.  And they are not alone in this–it happens no less than four times in the story, with us getting to see it happen twice.  Frankly, it’s hard to believe.  I was waiting for the revelation that the rain was super acidic or something, or that it mutated your lungs into gills, because the guy at the start looks like a beached fish.

Still, it’s a good episode, and actually more fun than the one above.  There are lots of cute moments as Avengers navigate the quirky personalities of the local town, including a standout scene where Steed manages to bluff his way past the receptionist at the winery (he claims to represent the wine merchant Steed, Steed, Steed, Steed, Steed and Jacques, only that Jacques was invented to give his company a French touch, and that he also invented the other Steeds because it looks better on the cards).  Emma also has a cute line when she warned about preparing for the upcoming flood and she replies, “Well, I put a down payment on a canoe.”  There is also an obvious but funny bit where Steed accidntally crushes his hat and Emma comforts him.

It’s a bit surprising that the character Jonah–the modern-day Noah who is full of fiery sermons–is actually treated with relative sympathy and authenticity.  He’s not out to judge people, as preachers often are in mainstream media, but to legitimately warn them of what he feels is a real danger.  Having said that, he does go a bit silly at the end.

Steed and Peel again show some lapses of judgment.  They do a bad job of maintaining their cover, and their neglect of the famous meteorologist that they bring into the case feels almost criminal, given that they have evidence of an enemy being aware of their activities at that particular spot.

Talfryn Thomas (Eli Barker) appeared in two Doctor Who stories with the Third Doctor:  Spearhead from Space and The Green Death.  Geoffrey Palmer (Martin Smythe) is a very well known actor.  I’m familiar with him as the husband on Butterflies, a brother-in-law on The Fall and Rise of Reginald Perrin, and one of the leads of As Time Goes By.  He also played an admiral in the James Bond film Tomorrow Never Dies, and a judge in A Fish Called Wanda.  He appeared in Doctor Who three times–twice with the Third Doctor (Doctor Who and the Silurians and The Mutants) and once in the revived series with the Tenth Doctor (Voyage of the Damned).  This episode actually marks the last of his four appearances (as different characters in The Avengers).

The Hour That Never Was

For the first time, the episode actually starts off the bat with Steed and Mrs. Peel, with them getting involved in the proceedings by accident rather than because they are on a case.  It’s a perfect kick-off to what goes on to be the sort of trippy plot one might expect from The Twilight Zone or The Prisoner. The story turns out to be a military dentist who accidentally discovers how to hypnotize people with the sound of his drill, and plays to take advantage of this by putting a whole camp under his spell for an hour, programming them to betray their country, and then selling their services to the highest bidder.

Along the way, we get this oddball of a mystery where Steed and Emma accidentally show up at the military camp too late (I guess) to be affected, and find it deserted.  They roam around, finding the whole place deserted, with people seemingly having vanished in the middle of everyday activities.  Although the camp isn’t totally empty–they do witness the death-by-sniper murder of a milkman, and also find a strangely sleeping rabbit.  Then Emma also disappears and we are really wondering what is going on.  Maybe the most notable thing about the episode is that it’s only in the last ten minutes that things really begin to be explained.  Steed says at one point earlier, “Razors still running.  Petrol gushing.  Unconscious rabbit.  One dead milkman,” to which I replied, “What is the heck is going on?”

When we do begin to find out, it’s hard, as usual, to make complete sense of it.  Why kidnap Emma but keep her alive?  Why knock out Steed only to return him to the site of his car accident, but without Emma?  What were they hoping to pull off?  How were the bad guys really going to make it so no one noticed an hour had disappeared from their lives–even if they changed all the clocks, and all the personal watches, surely at some point they would have realized it was an hour later than they thought?  Is this really the sort of thing one can pull of in just an hour?  Why not do all this at night? The big laughing gas scene at the end is also a bit sillier than I’d have liked.

Still, the actual story idea of the bad guy creating 30 unknowing “sleeper agents” who would be spread around the world and ready to be commanded by an enemy is a pretty good one, and makes for a quite engrossing episode.

Dudley Foster (Phillip Leas) guest-starred in a Second Doctor episode of Doctor Who, called The Space Pirates.  I’ve heard of Roy Kinnear, who plays Hickey, but I’m not sure why.  He appeared in an episode of Blake’s Seven once, and in a couple of episodes of The Goodies, and in the movie Help! with the Beatles, but I’m not familiar with him in any of them. 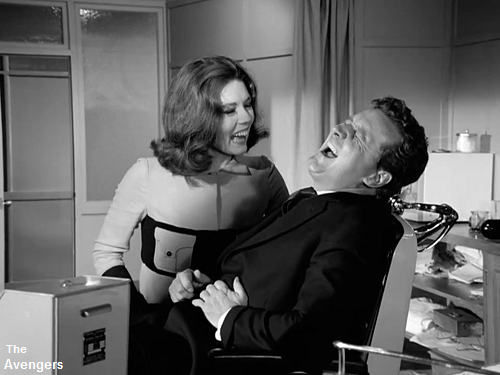