Still reeling from the impact of Fugitive of the Judoon, I have missed out on commenting on the last three episodes of the current series of Doctor Who.  On the whole, this part of the season has been running reasonably strongly, although it’s sort of a sad state of affairs when the “message” of the episode ends up being more memorable to me than the plot (as evidenced by some of my choices of shorthand descriptors in the title). 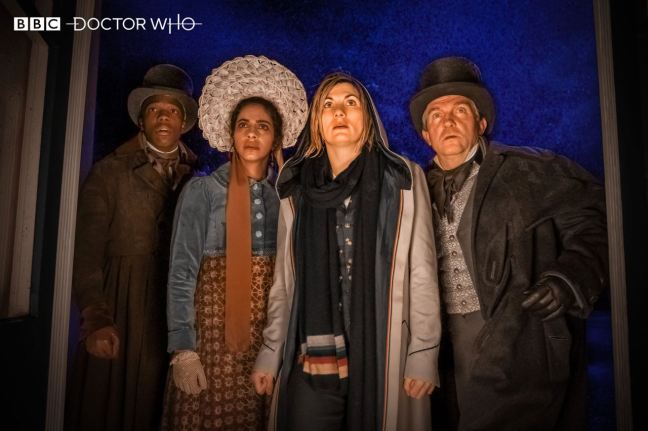 Praxeus suffers from coming only a few weeks after Orphan-55, delivering another environmental message thinly disguised as a science fiction thriller.  Like the earlier installment, Praxeus starts off strongly–it introduces a disparate range of mysterious ideas and then slowly pulls them together as the episode progresses, an approach used very well by Steven Moffat in episodes like The Empty Child or Silence in the Library.  The eventual idea of a disease which spreads thanks to the presence of plastic (and micro-plastic) in organic beings is not a bad one. 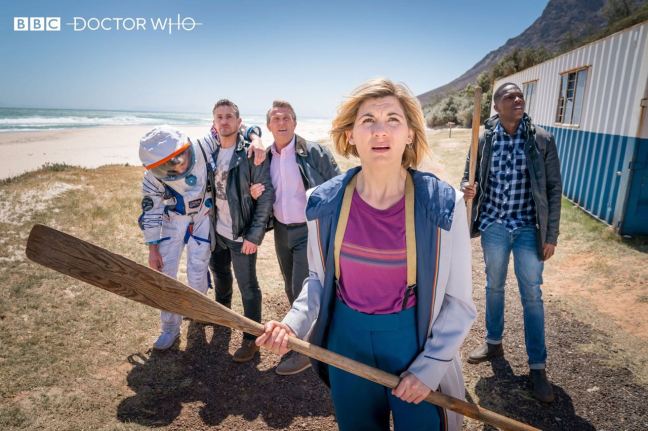 Unfortunately, Praxeus begins to stumble a bit in the middle, as the preachiness starts to bleed through –not as badly as Orphan-55, but still there–and the story itself starts to lurch rather than flow smoothly.  One character, Aramu, dies in the most needless and predictable manner, whereby he stays outside to watch the known-to-be-killer birds, and to the surprise of no one in the viewing audience, is killed by them.  Clearly the script was just done with him, as I don’t think anyone in the story even comments that this has happened or acknowledges his death in any way.

A lot of emphasis is put on the relationship between Adam and Jake, which feels misplaced and not very interesting (and unlikely to have been a story point if they had not been same-sex).  The episode might have benefited if it had used some of that time to go further with the companions themselves.  Having said that, the episode has got some good creepy bits and I find that Ryan in particular, of all the companions, is growing on me, just because we’re seeing a fun personality with him more and more.

Can You Hear Me? is quite a good episode that does a great introducing a new threat in the immortal Zellin and his bizarrely creepy disembodied fingers that stick themselves into people’s ears in order to feed on their nightmares (bleah!).  I’ve long-hoped that the show would give us an effective recurring antagonist who wasn’t the Master (or any other Time Lord) or Davros, and I was hopeful that that was I was seeing the start of.  When the supposed victimized girl, Rakaya, was revealed to be just like him but perhaps even worse, I was completely gripped–it felt like something special for the show.  The inevitable disappointment did come, though, it what was a far far too easy defeat for what had been built up as a nigh-impossible threat.  These guys are all-powerful and immortal, but they’ll still just stand there and watch the Doctor point her sonic screwdriver at something and zap them into a plastic ball.  Very unsatisfying.  The story had an epic set-up, it needed an epic conclusion. 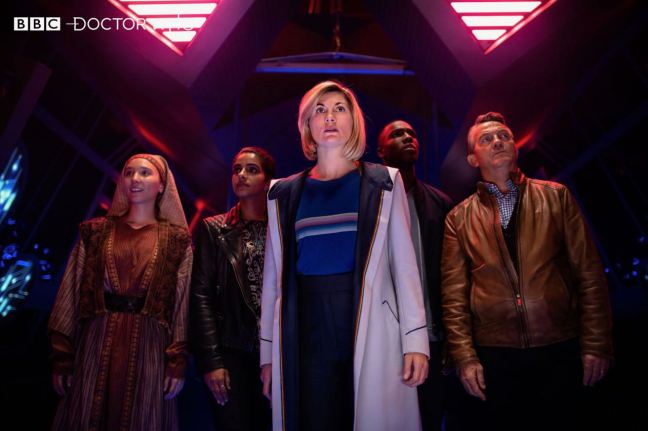 This is more annoying because there wasn’t time for the epic conclusion because the show decided it needed to do subplots featuring all three characters, with each one highlighting some aspect of mental health.  It’s a worthy message, to be sure, but badly integrated into the main plot.  Surely some of it could have been trimmed to make room for a better third act to the story.  It wasn’t until much later that I realized the episode’s title only really makes sense if it’s talking about the mental health issue, which just goes to show where the episode’s real priorities were.

The episode also gives the first glimpse we’ve had of the Doctor’s vision concerning “The Timeless Child” since Spyfall part two, but like then it’s just the barest teaser, like an image released on Twitter, rather than a meaningful hint of any sort.

Incidentally, there seemed to be a flurry of comment after the episode that Zellin and Rakaya were Eternals, last seen in the Fifth Doctor story, Enlightenment.  But as far as I can tell, they never say that–they just talk about the Eternals as well as the Celestial Toymaker and the Guardians, also old-school Doctor Who nigh-omnipotent creatures, as beings similar to themselves, seemingly all enjoying some sort of immortal fraternity together.

The Haunting of Villa Diodati is the show’s latest installment, featuring the Doctor and fam coming into say to Mary Shelley and her cohorts on the night she conceives of Frankenstein.  As it is, there is something else way creepier going on, with ghost-story tropes piling up on top of each other, mixed in with some interesting historical tidbits about Lord Byron, Percy Shelley and others.  The whole thing is very creepy and visually arresting, and to my pleasure, mostly held up until the end.  I only worry because this episode is clearly a prologue to a longer story, and so far it’s been in the middle that many of this season of Doctor Who episodes has fallen flat a bit.  Still, I like what we’re seeing of Jodie Whittaker’s Doctor here, growing angry where appropriate, and becoming less patient with her companions at times. 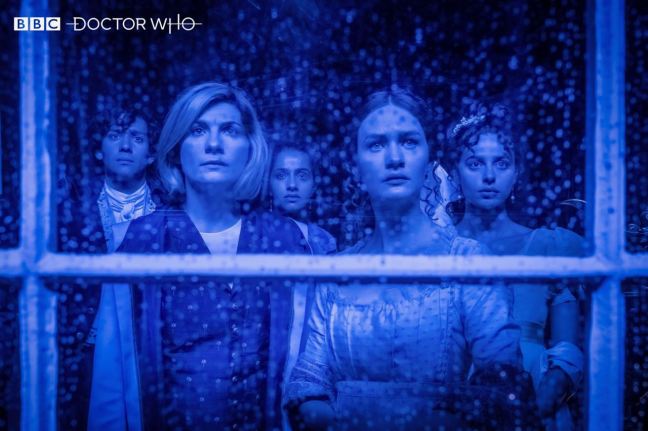 Speaking of the companions, Yaz is emerging as the “tough one” more and more, which has taken its sweet time but is still a welcome character development.  Meanwhile, Ryan is becoming the “funny one”, which means Graham, sadly, is turning into the “underused” one.  Of course, in reality, all three of the companions are underused, so that’s really speaking badly of how Graham has been positioned.  I mean, he’s there, and he occasionally makes funny comments, but it seems like he rarely impacts upon the story in any meaningful way, which is sad as I enjoy the actor.

Back to the episode, the big twist of course is the revelation of the “Lone Cyberman” halfway through.  Predictably, the story engineers a situation where the Doctor has to do exactly what Jack told her not to do in Fugitive of the Judoon, but it perhaps offers a hint of an explanation of where Jack was coming from with it–if you give the Cyber-whatever to the Cyberman, he’ll be able to bring the Cybermen back to life.  The Doctor know this and will presumably prevent this or at least mitigate it in the episodes that are to come. Still I was a bit disappointed that she held onto this Cyber-intelligence for so short a period of time, as I thought it would have been interesting if she went into the next part of the story still possessing the thing.

Anyway, Haunting is potentially a very good episode of the series, written by newcomer to Doctor Who Maxine Alderton, but in some ways we won’t be able to fully evaluate it until the rest of the story it’s telling is completed, presumably by showrunner Chris Chibnall.