I was away on holidays for a few weeks, and generally in places where my internet access was not strong.  Thus, I didn’t keep up with Doctor Who while I was away, and was waiting to return before watching the latest two episodes, Nikola Tesla’s Night of Terror and Fugitive of the Judoon. 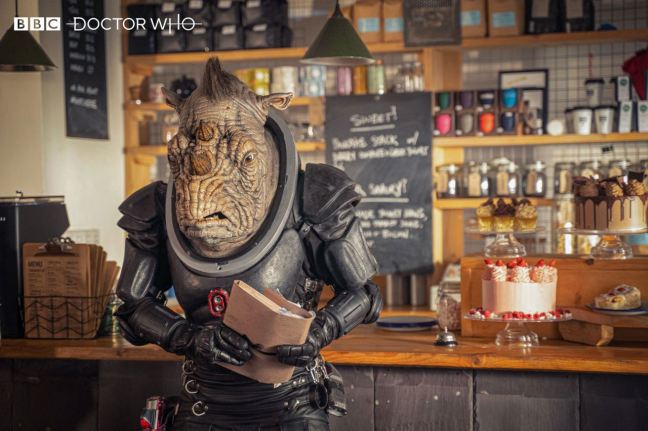 And then, as I was flying in, I downloaded an email from the BBC’s official Doctor Who newsfeed I follow which said:

(Spoilers, for Fugitive of the Judoon, which frankly is more warning than I was given)

Sub-Headline:  And you thought the return of the Master was big! Revisit the moment that the Doctor learned of Ruth’s identity.

Sigh.  Well, I can’t really blame the website.  After all, I did look past the headline, and I guess you’d assume if I was subscribing to this newsletter that I’d have certainly watched the episode by then.  But it was disappointing, especially after I’d already been spoiled about the identity of “O” earlier in the season.

So I got home and as soon as I had the chance I watched the two episodes.  I plowed through Nikola Tesla’s Night of Terror and found it to be resoundingly okay, which is pretty much par for the course of Doctor Who under Chris Chibnall:  not terrible, but forgettable.  In fact, I’ve already pretty much forgotten it.  I’d been sort of interested in the historical, educational material that was part of Spyfall, Part Two, but here, only two episodes later, I’m a bit over it. 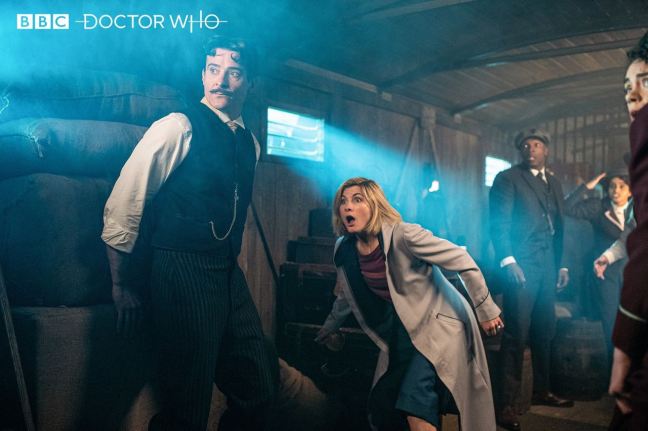 On the plus side, the alien Skithra look better than the alien Racnoss from The Runaway Bride several years ago, who were a bit similar in concept.

Then we get to Fugitive of the Judoon, which features the Judoon, of course–overzealous, Rhino-like alien police, who first debuted way back in the third season of the revived Doctor Who.  Their M.O. is the same as it was back then (in Smith and Jones, the first story to feature Martha Jones):  they tromp around a place looking for their quarry with their little scanners, and kill anyone who doesn’t cooperate.  The episode is a decent one and managed to surprise me with the return of Captain Jack Harkness–a character played by John Barrowman who hasn’t appeared on Doctor Who for years.  He shows up for a few minutes, accidentally teleporting the companions to him instead of the Doctor.  When things get the better of him, he resorts to delivering a message to the Doctor via Graham, Yaz and Ryan.

Unfortunately, he does this by means of confusing and obscure teaser of an upcoming adventure, rather than anything genuinely interesting.  Oh well, at least we have a “lone Cybermen” story to look forward to.  Who wants to bet that in spite of what Jack said, the Doctor will find that the lone Cybermen’s request is too compelling to deny?

Of course, all of this is just smokescreen for the episode’s big big reveal, which is that the fugitive of the episode is in fact Ruth, a jovial woman who works as a local tour guide, but is also actually none other than the Doctor, disguised by means of Chameleon Arch (see Human Nature, another third season story).  The trouble is this Doctor (called online variously as the Ruth-Doctor, the Fugitive-Doctor and the Jo Martin-Doctor, after the actress who plays her) doesn’t recognize our current incarnation as played by Jodie Whittaker, and Jodie doesn’t recognize her.  Neither of them recognize the other as someone in their past.

Here we get to the episode’s biggest irritation, which is that no one makes any reasonable effort to figure out which one of them is the past of the other.  No one says something like, “How old are you?”  Or, if that’s too ambiguous (given the inconsistency of this in the past), “Which number incarnation are you?” or “How long has your TARDIS looked like a police box?” or “Have you met Ian Chesterton, Jamie McCrimmon, or the Brigadier?”  Or any other incredibly obvious and realistic question that would come up at a time like this.

Instead, current-Doctor comes to assume that Ruth-Doctor must be in the past, because for her, Gallifrey exists.  The answer is kept intentionally vague, and thus the Doctor Who corner of the internet lights afire with theories and speculations, arguments and counterarguments, and wild cries that Chris Chibnall is ruining the show, and counter-cries that we should all just calm down and try to be nice. 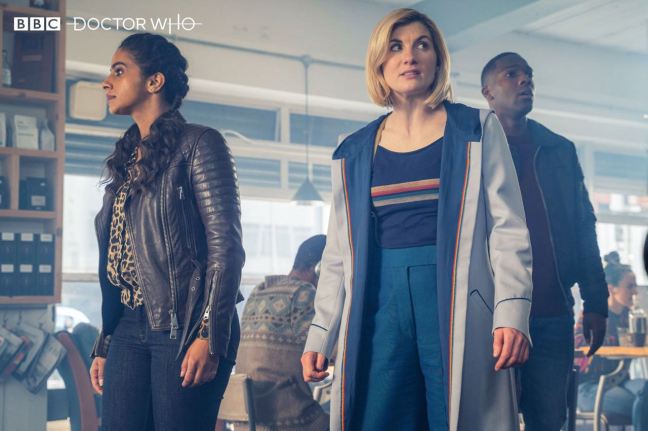 Trying to guess which answer will eventually be true is basically a fruitless exercise, at least based on anything internal in the show.  Any revelation will doubtless not be completely consistent with “established canon”, but any inconsistencies can likely be explained away by the show itself or by the internet tossing around ideas for five minutes.

Personally, I’d much rather have it turn out that the Ruth-Doctor is not a previously hidden incarnation from the past, and definitely not from some pre-First Doctor set of Doctors that we haven’t known about.  This is mostly because we already had a “surprise Doctor” not that long ago, with the War Doctor, and because any retroactive insertion into the Doctor’s previously established continuity creates a lot of confusion for some people as to how to identify the Doctors.  Not too often, but every once in a while, someone will comment on a Facebook post that we shouldn’t be calling Matt Smith’s Doctor the 11th Doctor, since the War Doctor was really the 9th Doctor, thus Christopher Eccleston was the 10th and Matt Smith is therefore the 12th…

They are forgetting or ignoring, I suppose, the fact that when most of us talk about the Doctor, we are not just talking about someone with a real internal chronology, but rather a character who featured in a TV show we like who was played by a famous actor who starred in that TV over a period of time.  I shudder to think of the posts and comments that will emerge if it’s revealed that actually Ruth-Doctor was First, or Third, or in a previous set of Thirteen that came before William Hartnell, or whatever.

The next episode of the show, Praxeus, is being released sometime today or tomorrow, but I doubt it will address the new Doctor question (it seems more like they’ll stretch this out for a bit before we return to it).  Unless it does, I’ll try to break down all of the pro’s and con’s of the various Ruth-Doctor theories that I’ve heard, in another post.  In the meantime, I’m off to get some pictures for this post.  I only fear that new pictures of Praxeus will be up, and I’ll have the next show’s next stunning surprise (like Yaz is really Susan, or Graham is Rassilon, or all the companions are actually future incarnations of the Doctor) spoiled for me!