Over a few posts, I’m going to choose a different creator or creative team–novelist, composer, scriptwriter, comic book artist, etc–who has influenced or inspired me, and in most cases brought me a lot of enjoyment.

This idea came to when when I saw a similar list recently, on another blog, identifying 25 creators who had inspired or influenced the writer.  It made me think about who would be on my list.  But I felt like I had more than 25 that I wanted to talk about, and so I came upon this idea.

For each year from 1919-2018, I’ll pick someone who produced something significant or recognizable from that year–based on what was published or released (with comic books being considered to have been released on the cover date, although I know that’s not usually true).  And of course, lifetime accomplishments beyond that year will play a big role in who is chosen and who is not.

Because some of the early years were a bit tricky (no television, not much happening in movies or comics that I’m familiar with, etc) I’ve also expanded my rules to say that I can include someone if that’s the year they were born, or in one case, the year they died.

Nat King Cole was born on March 17th of this year.  The jazz-pop singer with an amazing beautiful voice would have over a hundred hit songs, including Straighten Up and Fly Right, and of course, Unforgettable, in both its original version and the remastered version which turned it into a duet with his daughter.  That song found its way onto the my wedding video (edited by some friends), and was played a lot in my house back in the day.

Agatha Christie is known as the world’s most successful novelist, and the writer whose works are the third most widely published in the world, behind only the Bible and Shakespeare.  1920 was the year that she published The Mysterious Affair at Styles, which is the book that introduced her most famous creation, Belgian detective Hercule Poirot.  She invented and popularized many classic tropes of mystery fiction.  Some of her best known works are The Murder of Roger Ackroyd (the book which really put her on the map), Murder on the Orient Express, and The ABC Murders, which all have inventive twists.  One of my personal favorites was The Mirror Crack’d from Side to Side, a Miss Marple mystery (Christie’s second most famous character), which was an early introduction of her work to me.

Eugene Wesley Roddenberry was born on August 19, 1921, and went on to be a television writer and producer who is clearly most famous for creating Star Trek.  Like many great media franchises, Star Trek is not the product of just one person’s creative efforts, but there is no doubt that Roddenberry was instrumental in framing and developing everything we have about the USS Enterprise and its intrepid crew, introducing concepts which have continued to inspire other writers and producers to tell interesting and enjoyable stories to this day.  Roddenberry also directly contributed to Star Trek: The Motion Picture and the first season or so of Star Trek: The Next Generation.  Weaknesses in those installments showed that his declining involvement was ultimately beneficial to the franchise, but still a lot of credit has to be given to him for kicking it all off in the first place.

December 28, 1922 was the birth date of Stan Lee, another pop-culture icon whose actual contribution to his most famous works is hotly contested.  Lee is of course famous for his involvement in creating what is known today as the Marvel Universe–characters like Spider-Man, the Fantastic Four, the X-Men, the Avengers, and so on.  He did not do this alone, but clearly had his hand in the entirety of the creative renaissance that came out of Marvel Comics in the 1960’s and beyond.  He was full of colorful dialogue and crafted a bombastic persona in terms of the actual promotion of Marvel Comics.  I’m actually much more of a fan of DC than Marvel, but there’s no doubt that Lee’s early work helped to draw me into the comics as a medium and superhero stories as a genre.  And of course, these days I’m lapping up the Marvel Cinematic Universe content as much as anyone.

Richard Attenborough was born in 1923 on August 29 (a date he shares with my wife!).  I first became aware of Sir Richard Attenborough CBE, as he would have been properly addressed then, as an actor many years ago when I watched The Great Escape on TV.  Later, I got to know him as a film director of such works as Shadowlands and Cry Freedom.  (By then, he was officially The Rt Hon. The Lord Attenborough CBE.)  I loved Shadowlands as a movie, with its low-key but moving portrayal of CS Lewis’ marriage.  It was maybe my favorite movie of 1993, along with The Fugitive (because, you know, they’re basically the same film so its hard to distinguish them).  Cry Freedom can be criticized for being one of those movies which uses a white character with growing social awareness to tell the story of an oppressed minority…but it’s still a quality film that is well made and features some strong performances.  Attenborough also featured in Jurassic Park, which I didn’t like so much, and directed Gandhi, which I have never seen.

Dude created, produced and hosted The Twilight Zone, while also writing over half of its episodes.  In so doing, he became one of the most recognized American television personalities, ever.  As he was working in the early days of television, Serling actually helped to shape the medium, even as he struggled against its limitations.  He once said, referring to the mandated commercial breaks that television programs had, “How can you put out a meaningful drama when every fifteen minutes proceedings are interrupted by twelve dancing rabbits with toilet paper? No dramatic art form should be dictated and controlled by men whose training and instincts are cut of an entirely different cloth. The fact remains that these gentlemen sell consumer goods, not an art form.”  People are to this day still making Twilight Zone stories, while I haven’t seen a dozen rabbits selling toilet paper at any point in my lifetime.  Serling was born in 1924 on Christmas Day.

1925 was the year that Buster Keaton released Seven Chances.  It’s probably not his “greatest” work (maybe that ‘s The General from the following year, or Sherlock jr from the previous year?) but Seven Chances is one of my favorites.  The silent film tells the story of a young guy who must marry somebody–anybody–by 7:00 pm that evening or lose a massive inheritance.  In spite of some awkwardly dated elements, it features some of the most astounding images ever put to film, including the classic shot of Keaton’s character being chased down the street by hundreds and hundreds of disgruntled would-be brides.  Buster Keaton directed a couple of dozen short films and over a dozen more features, and with his ingenious comic timing, unparalleled stunt work, and classic deadpan expression, he is one of the stalwarts of the early days of cinema, and in particular the silent era.  I’ve had the privilege of seeing two of his movies–The General and Our Hospitality–in cinemas accompanied by live music, which makes for a great cinematic experience.

Alan Alexander Milne first published Winnie the Pooh in 1926, and the world of children’s literature would never be the same.  The stories in that book, as well as it’s follow up, The House at Pooh Corner, are full of charming atmosphere and clever plotlines–but its the characterization of the anthropomorphized stuffed animals that inhabit the 100 Acre Wood that really makes them memorable.  The personalities and foibles of Winnie the Pooh, Piglet, Tigger, Eeyore and the rest are so specific and so compelling that it’s pretty easy to cast almost any group of people you are with into similar roles.  I’ve never been a huge fan of the Disney adaptation of the Pooh stories, but the original books I love. 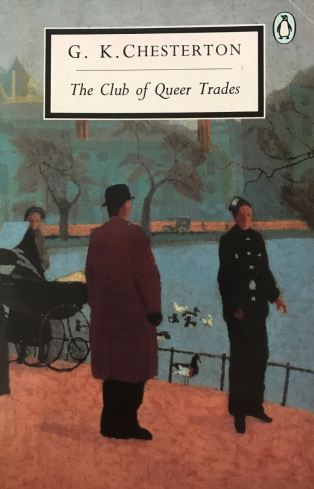 Gilbert Keith Chesterton is the oldest person on this list (born in 1874), and wrote literally thousands of essays, stories, poems, books and plays.  I know him best from his most famous creation, the erudite and unassuming detective, Father Brown–whose fourth compilation of short stories, entitled The Secret of Father Brown, was released in 1927.  The Father Brown stories are some of my favorite detective fiction.  I particularly enjoy how the character’s ability to find flaws in flimsy thinking (something that was a gift of Chesterton’s himself) and to allow a keen insight into human nature to inform his deductions.  He was also just as interested in bringing criminals to repentance as much as justice, which was an interesting dynamic.  G.K. Chesterton also wrote an interesting series of connected short stories called The Club of Queer Trades, and another mystery series that I really like called The Paradoxes of Mr. Pond, in which seeming impossibilities (“paradoxes”) would be revealed to be true, if one just looked at them from the right point of view.

Ennio Morricone was born on November 10, 1928.  He’s an Italian composer who has lent his talents to hundreds of movies, which include lots that I’ve seen such as The Mission, In the Line of Fire, Cinema Paradiso, Fists in Pockets, Hawks and Sparrows, Hamlet (1990), and Wolf.  He’s maybe best known in popular culture for his iconic themes in The Good, the Bad, and the Ugly, a film I haven’t seen but whose main music we’re all well familiar with.  My favorite piece of his work, though, is the score from The Untouchables, from 1987.  The musical soundtrack of that film does a great job establishing the story’s atmosphere and accentuates the unique artistry of this very cool crime-action movie.

I’m not the biggest fan of Tintin, which is Belgian cartoonist Georges Prosper Remi’s most famous series, but I’ve certainly enjoyed some of the rollicking adventures that Hergé (Remi’s pen name) published–although I’d be hard-pressed to actually remember any details from any of them.  The intrepid boy reporter’s premier adventure, Tintin in the Land of the Soviets, began serialization on January 10th of this year.  He’d go on to finish 23 complete Tintin adventures (and to start work on a 24th), which spanned such styles as mystery, drama, crime, espionage, adventure, slapstick humor, and more.

Richard Donner was born on April 24, 1930, and when he was in his late 40’s, he directed Superman, the Movie, and in many ways gave birth to the first modern superhero epic.   Donner’s “verisimilitude” approach to the genre helped to make one of my favorite films, which continues to have an influence on the genre.  Donner also made the Lethal Weapon movies, as well as Scrooged, Radio Flyer, The Goonies, Conspiracy Theory and lots of other films I’ve seen.  He tried to make Superman II but was pulled from the project after a lot of tension with the producers, which is something we all generally wish hadn’t happened.  Years later a rough “Richard Donner Cut” of the film was released which gave a hint (but not a complete picture) of what his version of the movie would have looked like.

I’m not as big of a fan of Charlie Chaplin as I am of his contemporary, Buster Keaton (see 1925 above) but there’s no doubt that the man’s work pioneered much of what we know as film comedy and that he has had an enduring influence.  My favorite film of his is City Lights, which was released in 1931.  It’s a strong piece of work, bringing lots of farcical laughs even as it also pulls on the heartstrings, which is admittedly something Buster Keaton never really did.  Similar to my experience with Buster Keaton, I got to see City Lights in the cinemas with love musical accompaniment, which made for a rich and satisfying movie-going experience.