Dalek Empire II:  Dalek War is the four part follow-up to Dalek Empire, an original Doctor Who universe story featuring no established characters from the TV series, aside from the Daleks themselves.  Some spoilers ahead. 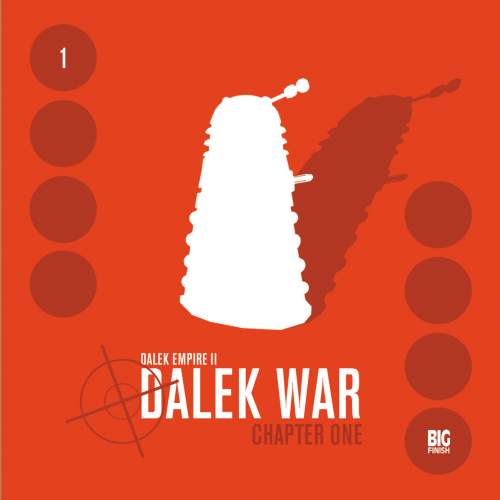 The story’s plot of the story picks up where Dalek Empire I left off, with the Daleks’ loopy effort to get help conquering the galaxy from alternate-universe Daleks who had already done so going terribly wrong for them.  The Daleks they get ahold of have indeed, conquered their reality, but through kindness, and they object to “our” Dalek’s more war-mongering ways.  As Dalek War part 1 kicks off, the human survivors have allied themselves with the alt-Daleks, seeing them as their salvation.  But as all fans of dystopian fiction know, the source of salvation is always just as bad or worse than the original problem–their path to peace is no less than destructive than the local Daleks more openly malicious approach; they simply feel morally superior for attempting it.

The leader of the human alliance, Kalendorf, has figured this out, and has been laying his plans to try to bring both sides down.   The intrigue and gradual reveal of this is perhaps the best part of Dalek War, helped in no small part to the fact that Kalendorf is played by Gareth Thomas, of Blake’s 7 fame.  Kalendorf is a bit like we can imagine Blake might have become if he’d stayed on his own show a bit longer:  completely driven for victory,  willing to pay any cost to get there, and feeling completely justified in his actions because the enemy is so vile.

Key to his plans is the rescuing of Suz–a human who fought for better treatment from the Daleks for their slaves, in return for increased productivity and diligence from the laborers.  Her questionable descent into this role was the focus of the original Dalek Empire, and here things have only gotten worse for her:  the Dalek Emperor has placed his dormant consciousness inside of her as a way of ensuring his own survival, making her a target for just about everyone. This includes Kalendorf, who sees her as a key for the ultimate victory.  Achieving this victory takes both Kalendorf and Suz into an incredibly dark place, which isn’t my favorite story arena but is well done here.

There’s a lot about Dalek War that works, including the performances, the mystery and twists regarding what exactly Kalendorf is up to, and the effective realization of the atmosphere and mood.   But there are things that don’t work so well also thrown into the mix.  This includes an excessive amount of non-linear storytelling:  all sorts of scenes are presented out of order for no strongly justified reason (except perhaps to allow the episodes to begin and end with certain story points).  For example, the whole story is actually told in flashback from a dialogue set thousands of years in the future.  This framing device goes unexplained until the fourth episode, which suddenly goes back some time earlier than earlier framing sequences to explain who these people are and why they are talking about things.  Other, perfectly ordinary story points are simply skipped over and then filled in later on.  There’s no particular narrative justification for this, such as an important reveal that needed saving for later.  Rather, it only serves to heighten confusion, with characters being repositioned or even being introduced without explanation, leaving the listener to wonder if they’d missed something (turns out, they had, but it wasn’t their fault).  The end result isn’t too confusing to follow, but it is still needlessly distracting.

There’s also a bizarre little side-plot wherein the Daleks terraform Jupiter into a human-habitable planet in order to function as a trap for humans who are flying by.  It actually works, which is ludicrous, but somewhat justified by the fact that the the human’s leader  is collaborating with the Daleks at that point–one assumes that’s the only explanation for why the humans would be stupid enough to fall for this.  But it’s still a transparently bad idea that one would think everyone would disagree with, and seems only to be in the story at all to give writer-director Nicholas Briggs a chance to bring “varga plants” from a 1960’s episode of the television show back into the mix.

With all that said, the central story of Dalek War is gripping enough to keep me interested in spite of its challenges.  And knowing that there are two more of these series out there, I was pleasantly surprised when the specific tale that started with Dalek Empire basically came to a full conclusion at the end of this run of episodes.  The actual climax is quite clever, in fact, so that’s fun to hear play out.  At the same time, Kalendorf and Suz have by then become so morally compromised that it’s a relief to have their stories come to a close.