And with Spider-Man: Far From Home, the Marvel Cinematic Universe closes out it’s third “phase” of production, and enters into a post-Endgame world…a world with no Tony Stark.

Well, not quite no Tony Stark.  Actually, there’s quite a bit of Tony Stark here.  The spectre of Iron Man looms heavily over everything that happens in the movie.  His face and image are seen everywhere, he is talked about constantly, and much of Spider-Man’s story arc has to do with living up to his former mentor’s legacy.  Robert Downey jr even appears in flashback from Captain America: Civil War.

In spite of all this, Far From Home, directed by Jon Watts, does quite a good job of helping this Spider-Man stand on his own cinematic feet.  Even in his previous starring role (Spider-Man: Homecoming), Tom Holland’s Peter Parker has felt more like a supporting player in the Marvel Cinematic Universe, rather than the star of his own story.  Now, even with Nick Fury, Maria Hill and Happy Hogan running around (sort of), and with the aforementioned Iron Man ghost, the movie does a good job Spider-Man front and center, chronicling his journey to becoming a major hero in his own right. As such, it’s an incredibly sensible and successful move for the MCU, given that they can no longer (presumably) lean on the original big stars (particularly Captain America and Iron Man) to drive their stories.  I now feel like I’m highly motivated to see whatever the next Spider-Man movie is, to see both the future of the wall-crawler as well as to see where the MCU is going next.

Spider-Man:  Far From Home is a movie that had some heavy lifting to do.  It had to serve as the coda for the epic and enjoyable “Infinity Stone” saga that’s been driving the MCU from the beginning, and especially in the last two years, including giving us a bit of a taste of what a post-“unsnap” world looks like.  And this it does, using the immaturity of high school students as way to deflate the tension of the grimness of it all.  Suddenly, the Infinity War is all a bit of a joke, with the most traumatic event in the history of the earth being given the new, innocuous name, “the Blip,” and focusing on how the affected teenagers are complaining about extra school work, and so on. 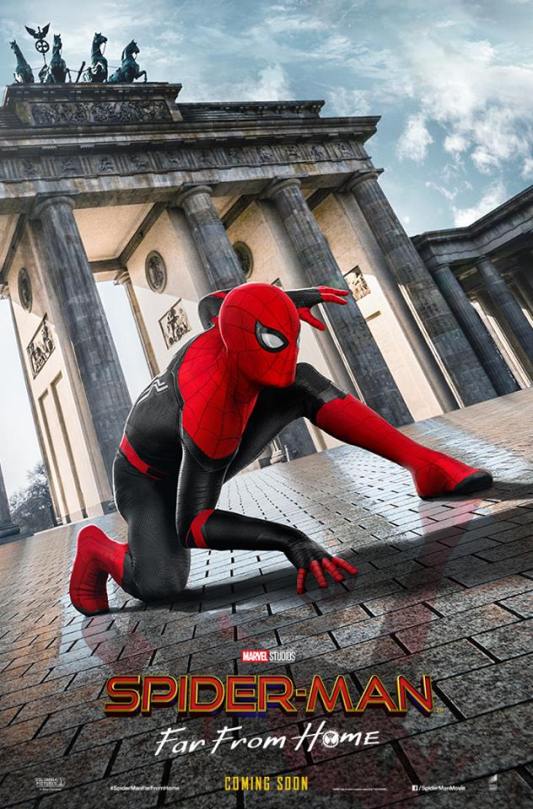 This light-hearted approach drives the entire movie, with the story giving plenty of attention to the adolescent antics of Peter Parker’s class on their trip to Europe.  Apparently, in spite of the nightmare of the Snap / Blip, tourism is just fine and Europe is still as beautiful as ever.  If you were to watch this immediately after Endgame, the tonal shift would be pretty jarring I imagine, but coming a few months later as it does I was quite happy to watch something a bit more jovial.  And where I originally found the MCU’s “non-traditional” approach to Spider-Man to be a bit uncomfortable (eg. high-tech Spider-suit, no Gwen or Mary Jane, a best friend privvy to all Peter’s secrets, a young Aunt May, and a sustained high school setting), I now find they feel familiar and welcome.

Of course, Jacob Batalon (Ned), Angourie Rice (Betty) and Tony Revolori (Flash) are all back and a lot of fun, but a big part of the success of this side of the movie is thanks to the engaging performance of Zendaya as MJ.  Wisely, she is no longer just an oddball outsider, but instead sits at the heart of Peter’s world and is the object of his affections.  She still has her dark quirks, but she also gets involved involved in the super-hero action, at times needing help and at times offering it, and at other times thrilling to swinging around with Spider-Man and all that sort of traditional “leading lady” stuff.

In addition to all the business with Peter Parker’s classmates and teachers, there is a superhero plot, of course.  In this case, it’s about Quentin Beck, dubbed “Mysterio”, played by Jake Gyllenhaal.  Beck is presents himself as a super-powered champion from another dimension, but is in reality a disgruntled conman from this one.  He is engaged in an elaborate scam to establish himself as an honored superhero in order to gain access to technology and wealth and all sorts of other hedonistic things.  To this end, he employs all sorts of high-tech misdirection, which leads to some pretty inventive scenes of Peter being confused and victimized by a series of illusions, and one Crowning Moment of Awesome where he sees past them.

But while Mysterio’s plan is interesting (though hare-brained), Mysterio himself unfortunately is not, with Gyllenhaal being a little too good at the trusted friend schtick, and not quite believable enough at the villainous psychopath.  Specifically, a scene where he threatens his own friends rings completely false.  What is intriguing is Mysterio’s organization, which is made up of a whole bunch of angry former employees of Tony Stark.  This includesWilliam Riva, played by Peter Billingsley (Ralphie from A Christmas Story), who reprises his role from Iron Man (he’s the scientist who was hassled by Jeff Bridges for not being as smart as Tony Stark).  This little repertory of grifters aren’t all that fascinating as individuals, but the concept of their being a whole group of them is interesting, especially since they survive the film unapprehended.  One can imagine the illusion of Beck (who does not survive) appearing in future installments, as the deceased figurehead of this organization, while the group itself pulls the strings from the background.  (Of course, not long ago one could also imagine the Vulture or the Scorpion appearing again this time around, but nothing came of that).

Fans of the MCU will be happy to know that the mid- and post-credit scenes are back (after their solemn absence from Endgame).  The first one picks up right after the movie ends, and is great.  The other one happens as some undetermined point close to the movie’s main events, and is stupid.  The great one features “Mysterio’s final revenge”, as the con-man pulls one last trick from the grave (well, presumably with the help of the organization I mentioned) where he frames Spider-Man for all his actions and exposes his secret identity to the world.  It’s a gripping twist that hopefully sets the stage for the future.  It’s made all the more interesting by the inclusion of comic book mainstay J. Jonah Jameson, making his first film appearance since 2007’s Spider-Man 3, played again, awesomely, by J.K. Simmons, who deservedly is on everyone’s lists of the greatest comic book movie casting decisions, ever.

Far less awesome is the second tag scene, which features the dopey revelation that the Nick Fury and Maria Hill we’ve been watching the whole film were really Mr. & Mrs. Skrull from Captain Marvel, while the real Nick Fury has been “vacationing” on some Skrull-filled spaceship, where he’s up to something designed to remind viewers that there’s more going on in this MCU than just Spider-Man.  While this is consistent with a few little hints that were sewn into the film, it is not at all necessary for the plot.  Ultimately, it serves to undermine the role that both Fury and Hill had in Far From Home (oddly enough, I’m more interested in seeing them in action than I am the Skrulls) and also reminding me of how inferior a film Captain Marvel was.  Although Far From Home was a bit silly, at least it wasn’t dry and passion-less, and its main character had a meaningful story arc to walk through.

Oh, one little post-review nitpick:  Far From Home seems to retcon the end of Tony Stark’s life in Endgame.  According to this film, I’m meant to believe that Tony Stark entered into the second half of Endgame not only fully expecting to die, but expecting Peter Parker to be raised from the dead so he could become his successor.  Why else would he bequeath Peter a special piece of technology whose name directly referred to his death (EDITH:  Even Dead I’m The Hero)?  Unless all that is supposed to be part of a Nick Fury con, which would be consistent thematically but not logically–if Stark’s tech is easy to reprogram by others, than it should also be easy to duplicate, making a lot of the plot of Far From Home sort of pointless.