There are at least three moments in Shazam! that made my inner-nerd do a little leap of delight.

We’ll get to them in a moment.  First though, I want to reflect upon the film’s general strengths and weaknesses, beyond it’s obscure comic book appeal. 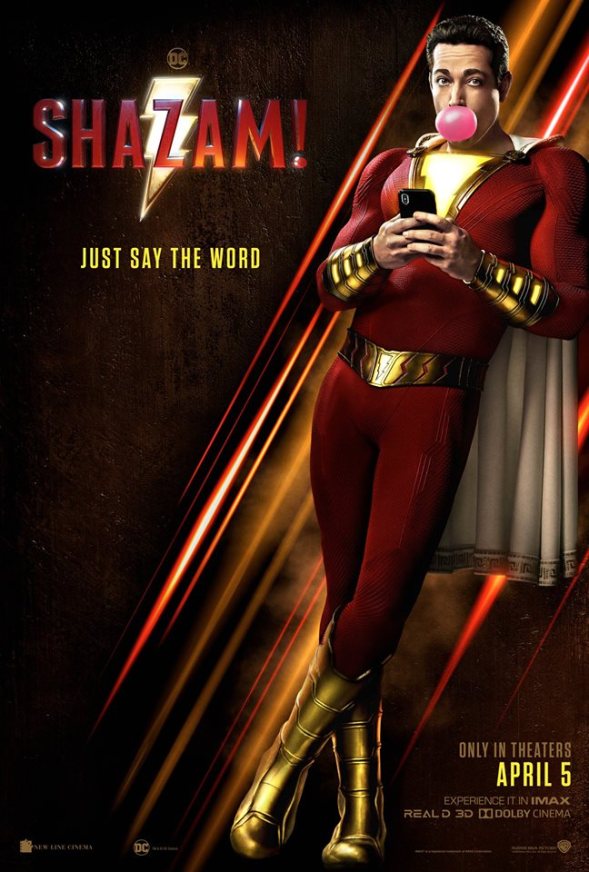 Shazam! is the latest film based on a DC Comics character to hit the big screen.  It’s arrived with much critical and financial success, and carries with it the reputation of being the kind of light-hearted whimsical escapist superhero fantasy film that the DC Extended Universe has thus far been famous for not making.

And this reputation is sort of deserved.  Sort of, but not quite.

Incidentally, there are spoilers ahead.  Big spoilers. Big Big Spoilers!

It is whimsical, it is escapist, it is fantasy, and it’s largely light-hearted, as it tells the story of a marginalized child who can with a magic word can become a powerful grown-up superhero.

But it’s also got some pretty darn creepy moments.  In fact, my daughters went to see it with a friend and accidentally walked into the wrong theatre, where the movie was already halfway through, and one of them thought she’d walked into a horror movie.  There’s one bit where a woman dies in agony, burning from the inside out.  And another sequence where a whole bunch of disposable characters get their heads bitten off by gruesome monsters.

But aside from those sequences (which are at least, quite isolated), the movie tells a fun story with the best characterization we’ve had in a DC Extended Universe movie, aside from (perhaps) Wonder Woman.  We get easily drawn into the lives of foster children Billy Batson (Asher Angel) and Freddy Freeman (Jack Dylan Grazer), and their interactions easily carry us through the early parts of the movie, before the schemes of the movie’s villain really get going.  There’s a lot of enjoyment in the dynamics that Billy and Freddy have with the other kids from their group home.  The “parents” (as played by Marta Milans and Cooper Andrews) are actually amazingly positive role models, and all the kids are quite fun.

But of course, the star of the film is Zachary Levi, who plays Billy transformed into an adult-sized hero.  When he shows up a good third of the way through the movie, things brighten up quite a bit, even though I’d already been having a good time.  He brings all the charm and child-likeness that you’d want, and does a more plausible job playing a child-in-adult-body then say, the cast of the recent Jumanji did.

I like the story of Billy coming to terms with his powers and his role in the world.  There are lots of fun scenes with Levi testing his powers and engaging in early attempts at heroics, as well as just generally taking advantage of looking like a grown up.  Levi and director David F. Sandberg do a good job with this stuff, delivering lots of laughs and helping us to connect to the adolescent reality that’s supposed to be behind everything.  They do this in a way that gives the movie a unique tone which sets it apart from all the other comic book superhero films that we see.  Even though we’ve seen “power discovery” scenes, and “trial heroic” scenes, and “friends having arguments” scenes before, this movie managed to visit all that territory with a voice that’s fresh and has great  confidence in its own material and message.

Less interesting, however, is the actual conflict with Mark Strong’s Sivana the movie’s villain.  The guy has some decent motivation, but the sequences with him get a little repetitive, and the “murdering his family and business board” scene, while well directed, is a bit cliched.  His weird allegiance with the seven deadly sins is underdeveloped, so they feel like they could just be any random group of monsters.

I also wasn’t a big fan of the wizard Shazam himself, as played by Djimon Houson.

(A quick digression:  I know, “Shazam” is supposed to be the name of the transformed Billy as well.  But as many will know, that wasn’t always the case.  For years, “Shazam” was the name of the wizard, while the hero was “Captain Marvel”.  However, because of some savvy maneuvers by Marvel Comics in the 1970’s, DC Comics–the owners of Captain Marvel–are not allowed to publish a comic called “Captain Marvel”, even though they can still call the character that.  A few years ago, they decided they were sick of it and just rebranded the character himself “Shazam.”  But still, I will usually refer to him as “Captain Marvel” because 1) I like it way better, and 2) even in this movie, they never actually definitively call him “Shazam”.  He implies it at one point, but even then there are still potentially other reasons why he says what he does.)

Anyway, back to Shazam the wizard:  he really just looks like a guy dressed up in funny clothes with funny hair talking with a funny voice, and doesn’t give much of a personality to hang onto.  Really, the most interesting thing about him is that Houson is also in Marvel’s Captain Marvel, which just came out and has an obvious name-based connection with this movie.

But these weaknesses are more than made up for by the movie’s climax, where we get the surprisingly fun sequence of all of Billy’s fellow orphans being transformed by the wizard’s power as well.  It’s incredibly hokey but somehow works really well–there’s a charm to all their heroics that sells it.

Ultimately, I liked the film a lot, in spite of it’s weaknesses.  All credit to Sandberg and writers Henry Gayden and Darren Lemke for pulling together a motion picture that makes such good use of characters, dialogue, action sequences and visual motifs (spheres!) to tell its story. 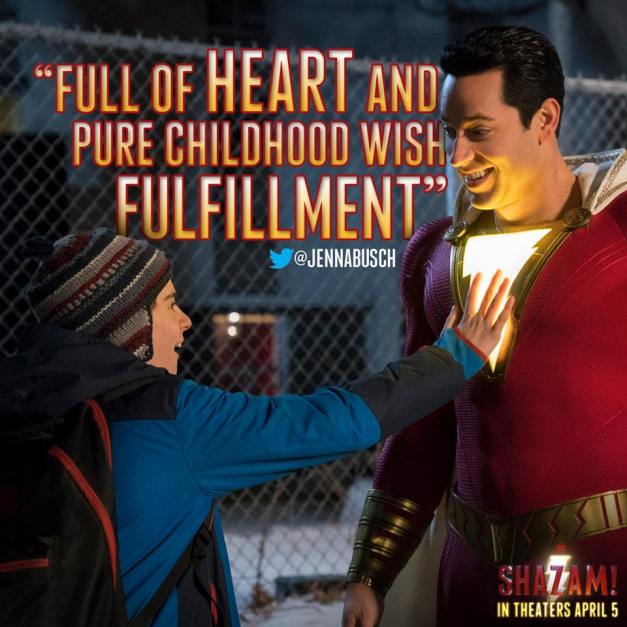 And beyond all that, as I already mentioned, there are those three moments that brought special smiles to my face, because it meant the filmmakers appreciated some of the best parts of the source material and chose to bring it to life on the screen.  In other words, Shazam! satisfied both my inner film critic and my inner comic book nerd…something that rarely happens.

First, there’s Mr. Mind, the talking worm at the end of the film.  Yeah…what was up with that?  I hear somebody asking.  Well, he’s a hyper-intelligent talking worm, and is one of the franchise’s greatest villains!

Because he’s a hyper-intelligent talking worm!!  What more do you need??!

I know it sounds silly, and it is, but that silliness is a huge part of the appeal of Captain Marvel, and part of what makes superhero comics awesome.  We don’t need that in every superhero movie, but it’s nice to have one or two that embrace that with both hands, and Shazam! in its best moments does exactly that.

The second moment came when Mary Marvel showed up. I mean, I guess she’s called “Lady Shazam” now, but for me she’ll always be Mary Marvel. She’s not actually a favorite character of mine, but may just be the superhero who best represents that light-hearted whimsical escapist fantasy thing we were talking about earlier.  She looked spot-on perfect as played by Michelle Borth–I only wish she’d had a bigger part in the subsequent fight that took place.  That, and also that she was still Billy Batson’s twin sister.

And the third thing was when Billy used his magic word and the lightning that it summons as a weapon.  This is something Captain Marvel has been doing at least as far back as the 1990’s when Mark Waid and Alex Ross did Kingdom Come, and it was a great little addition to the hero’s arsenal (especially as that was before he had lightning powers).

Three little moments that were just icing on the cake for an already-satisfying movie-going experience.  Bring on the sequel!