OK, this is the film that demonstrates more than any other that we are genuinely in some sort of golden age of cinematic comic book adaptations.  Not because, Spider-Man: Into the Spider-Verse is perfect (it’s not), but because it includes geeky material that is so esoteric that even comic book nerds would find it a bit obscure, and yet which movie studio executives are apparently still confident will pull in enough of an audience to make the film profitable. 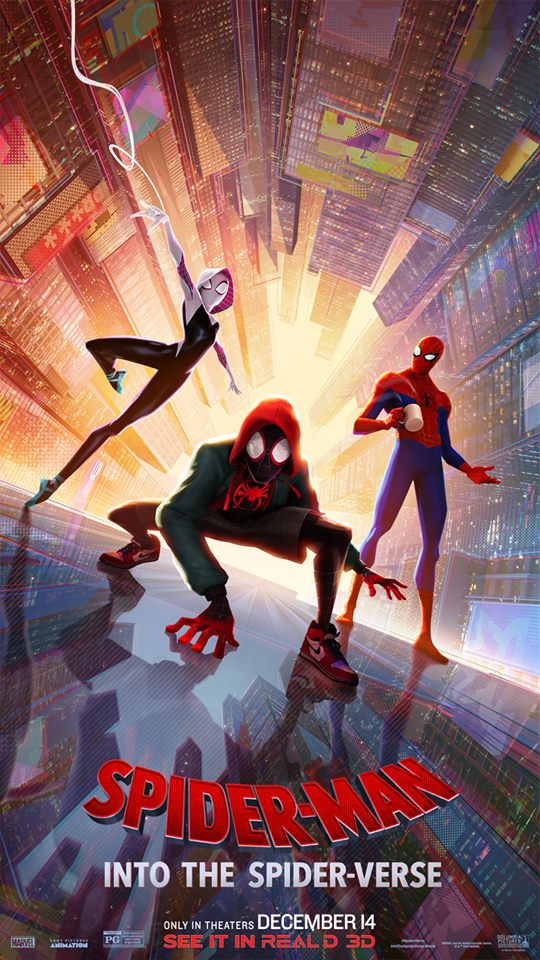 Spider-Verse is all about the Miles Morales version of Spider-Man.  Miles is from the comics–in 2011 he replaced Peter Parker (who had died) as Spider-Man in what was called the “Ultimate Universe”–an imprint of Marvel Comics that had its own separate continuity.  The character was popular and often seen as a positive roll model for comic fans of different ethnicities, as he’s a mix of African American and Puerto Rican.  More recently, Miles was integrated into the mainstream Marvel universe, serving as Spider-Man alongside the regular Peter Parker.

In Spider-Verse, developed by Phil Lord and Christopher Miller (the brains behind The Lego Movie and the early days of Solo), young Miles gains spider-themed powers via a genetically manipulated spider, and then is briefly mentored by his universe’s Spider-Man before he’s killed battling the Kingpin.  Now Miles is left alone and confused about what has happened, but as luck would have it, other Spider-Men from other dimensions start showing up.  It turns out that the Kingpin was attempting to break the barriers between different universes so that he can find a living version of his family (his own having died in an accident when they realized his villainy).  Together this strange mixture of heroes must confront the Kingpin and destroy his experiment before it can endanger the multiverse.  At the same time, they hope to get back home, but to do so, one hero must remain behind.  Miles Morales is the obvious choice, but is he ready to fight this battle at all, when it has already claimed the life of this universe’s own Spider-Man?

Well, the answer of course, is that he is.  Or at least, he can be after one honest (though one-sided) conversation with his Dad that helps him unlock all his confidence and turn him into the superhero we knew he’d eventually become all along.

But the predictability…and even shallowness…of this story point does not detract from the film too badly.  Indeed, the movie is quite entertaining.  The characters have the right amount of heart and depth, the jokes land more often then they don’t, and the script does a decent job juggling all of its characters–which include two Mary Jane’s, one Aunt May, a female Doc Ock, a bunch of re-imagined versions of popular Spider-foes, and I think nine versions of Spider-Man.  Some of them are just cameos but the important ones include

• Spider-Woman, aka Gwen Stacy (known to comic fans as “Spider-Gwen”), who is a hero even though she failed to prevent the death of her best friend Peter Parker.  She becomes the love interest for Miles Morales.
• Spider-Man Noir, a 1930’s black and white hard-boiled detective variation, who is voiced by Nicholas Cage of all people
• SP//dr:, a young Japanese girl who shares a telepathic link with a radioactive spider that she co-pilots a giant spider-robot with
• Spider-Ham, a “funny animal” version of Spider-Man who is a talking cartoon pig.
• And finally, Spider-Man, aka Peter Parker, who is an older, overweight and jaded version of the character, who becomes a mentor to Miles and must rediscover the true hero within himself at the same time.

I was a bit disappointed by Spider-Ham, as there wasn’t a lot done with the concept aside from some silly sound effects, and the voice acting by John Mulaney was a bit too bland considering the idea of the character.  But aside from that I enjoyed the divergent mix of these personalities, and found that Miles’ relationships with both Peter Parker and Gwen Stacy–as well as the Kingpin and his own father–had enough in them to keep the movie grounded and interesting, beyond being simply “fun”.  Aside from Mulaney and Cage, the voice case includes Shameik Moore, Jake Johnson, Hailee Stanfield, Chris Pine, Liev Schreiber, and Lily Tomlin, and is generally solid.

But the true hero of the film is the visual style, which is highly kinetic remix of comic-type imagery with a strong sense of graphic design.  For example, the screen is split frequently to show multiple images at once, panels are layered on top of each other, and things like internal monologues and sound effects are often printed on the screen itself.  It’s the kind of fast paced slinging of images where there is no way to see it all at once, and occasionally the sense of space gets a bit confusing, but you’re never lost in the story itself.

It’s a feast of animation and design and movement that would be at the least interesting even if the movie was terrible; but in this case it’s backed up by a good enough story with solid acting and direction to make it all into a decidedly positive and enjoyable experience.