And here we are, ready to carry on through the massive 1985 maxi-series, Crisis on Infinite Earths, written by Marv Wolfman and penciled by George Perez.   The last issue ended with the death of Supergirl, who laid down her life to deliver critical blows to the Anti-Monitor and prevent his plan to reduce the vibrational differences of the remaining earths, thus leading to their destruction.

Now, we continue with #8, which features the series’ other major heroic death.

Issue 8 – A Flash of the Lightning!

Pages 1-2 – We catch up on what’s been happening with the Anti-Monitor since his defeat at the hands of Supergirl.  He’s had to build a new physical presence around himself, which allows George Perez a chance to create a nifty & sleek new design for the villain.  We also are reminded of the fact that the Flash is still being kept prisoner (something that will be very important this issue) and continue to see the cowardly and pathetic Psycho-Pirate, allowing us to feel bad for him even as we hate him.

The whole crew is heading for Qward, the Anti-Matter version of Oa, from where the Anti-Monitor plans to destroy the remaining earths.

Page 3 – We cutaway to Darkseid and Desaad on Apokolips, touching base with these characters while explaining why they are not more intimately involved in these universe-destroying proceedings (the answer, simply, is that Darkseid is waiting for whoever wins the battle between the heroes and the Anti-Monitor, supposing that if the heroes win nothing will have changed, while if the villain wins he’ll be weaker and unable to stand before the might of Apokolips.

For some strange reason, Darkseid likes to speak in quotation marks.  His dialogue includes comments like

Silence your sniveling, Desaad.  I have already taken “certain precautions.”

I have diverted all our energy to “cloak” our presence here.

Someone out to teach that guy grammar.

Page 4 – Picking up on a moment from Issue #5, we find that since the universe-merging has now been halted, the Guardians who were held in some sort of stasis have now been freed and the Green Lanterns’ rings are now functioning again.  A bunch of internal bickering amongst the Guardians ensues.  Kudos to Marv Wolfman, I guess, for taking the time to explain why these various DC Universe heavyweights aren’t more involved in things; in this case it seem simply that the Guardians didn’t know how bad things were before they were imprisoned.  Familiar Green Lanterns who appear on this page include Tomar-Re, Katma Tui, Arisia, and Ch’p.

Page 5 – The action cuts briefly to the 30th Century Legion of Super-Heroes headquarters, where we see that Brainiac 5 attempting to deal with the fact that the five remaining earths, whilst not in danger of fully merging, are still overlapping at points.  Brainiac 5 was famously in love with Supergirl and so his relentless efforts are also seen as a way for him to avoid facing his feelings.

Pages 6-13 – In a whirlwind of storytelling, we catch up with Firestorm in the present, who jokes with his girlfriend Firehawk about his recent “connection” with Killer Frost.  We learn that the Justice League has captured T.O. Morrow, the professor who designed the Red Tornado body, in an attempt to repair the damaged android.  They meet up with J’Onn J’Onzz, Vixen, Cyborg and the Atom (in his Sword of the Atom garb, and having shrunk not due to his normal powers but thanks to Superman’s reducing ray), all attempting to figure out what the Anti-Monitor did to Red Tornado.

Then the team then sends John Stewart to pick up Blue Devil from a beach in Los Angeles to help as well, but Morrow ends up setting off a booby trap which destroys Red Tornado, injures several others, leads to Firehawk creating a new costume for herself, and possibly causes the JLA satellite to be destroyed (its ambiguous).  Morrow mysteriously disappears (to be revealed to be part of Luthor / Braniac’s plot to create a legion of villains) and Blue Devil finds himself teleported into the pages of the Omega Men!

Page 14 – Back on Qward, the Anti-Monitor oversees his warriors building his Anti-Matter Cannon.  The narration describes the Antimatter Universe as stretching on for more than 32 zillion light years, seeming to treat it as if “zillion” was a real number.

Page 15 – A restored Psycho-Pirate decides to torture the Flash, but the Flash has been building up his strength and breaks free of the goo he’s being held in with the dramatic dialogue, “Psycho-Pirate…eat Jell-o!”  I’m waiting to hear that get used on the Flash TV show.

Page 16 – More dramatically, Barry Allen overcomes the Psycho-Pirate’s emotional attack and fights back in a fit of rage that references the fact that he was convicted of a murder he didn’t commit in the pages of his own recently completed title. 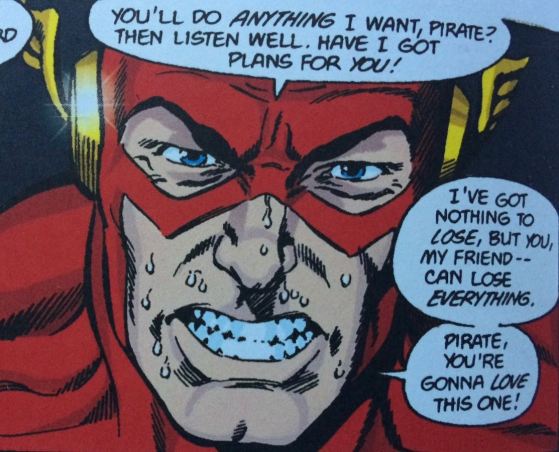 Pages 17-19  – Using the Pycho-Pirate against the Anti-Monitor, the Flash creates a rebellion amongst the thunderers of Qward, and then brutally leaves him to his fate by punching him out.

Pages 20-23 – The Flash’s final run.  Barry Allen destroys the concentrated anti-matter at the heart of the Anti-Monitor’s cannon, effectively saving the universe.  In the process, he reflects upon the people who have meant the most to him:  his parents, Iris (his wife), Fiona (his second fiancee), Wally West (Kid Flash), Dexter Myles (an actor friend who became the curator of the Flash Museum), Ralph & Sue Dibny (the Elongated Man and his wife), and Hal Jordan (Green Lantern).

He then begins to move through time, briefly encountering the Joker and Batman (explaining an earlier appearance in issue #2) and Wally West (to be explained in #12), before disintegrating.  The Narration tells us that he died for what he believed in, that he died without regret, and that though his death is unknown to all but one (the Psycho-Pirate, presumably), he will be mourned.

Pages 23-24 – The Anti-Monitor rails about how these heroes continue to thwart him, and decides to absorb the entire anti-matter universe (destroying all the lives it contains), so that he can win by changing time itself.

Page 24-25 – The Challengers of the Unknown react when the universe itself seems to scream, revealed to be the Spectre responding to the Anti-Monitor’s plan to change reality.

The issue ends with a quote from Scottish poet William Knox as a eulogy of sorts for the Flash:  “Oh, why should the spirit of mortal be proud?  Like a fast-flittering meteor; a fast-flying cloud, a flash of the lightning, a break of the wave, he passes from life to his rest in the grave.”

Pages 1-2 – Six Guardians on Oa act against the others to give Guy Gardner a Green Lantern ring, charging him to be part of their new mandate to eliminate evil before it starts.  However, before much else can happen, a mysterious red flame strikes them and kill all but one of the Guardians.  The last one swears Guy Gardner to the cause of avenging his brethren.  I’ve no idea what was going on here, I read some of the concurrent issues of Green Lantern but not enough to keep track of it all.

Page 3-4 – Picking up from last issue, T.O. Morrow appears on Brainiac’s ship with lots of other villains that Luthor and Brainiac have been gathering.  Lex Luthor from Earth 2 insists he should be in charge, not battle-armor Luthor from Earth 1, and Braniac responds by killing him.  Dr. Polaris, Killer Frost and Psimon from earlier in the series are all present here.

Page 5 – Cutaway to Nightwing, Starfire and Jericho boarding a spaceship that is going to take them back to Starfire’s planet Tamaran, for dramatic purposes, that you’d have to read the current Titans issues to understand.

Pages 6-8 – Back on Earth, everyone deals with fact that the “Warp Zones” still exist, spaces where different times and dimensions overlap.  The story flashes around to lots of characters, some shown in media reports.  We see Firehawk, Cygorg, Wonder Girl, Changeling, Kole, Tawny Young, Lois Lane, Rip Hunter, Jenet Klyburn, Jack Ryder, Will Magnus, Bethany Snow, Darwin Jones, Morgan Edge, Lana Lang, and Bernie from Sugar & Spike.  We also see Clark Kent in his TV anchorman role, where it is commented that he’s been emotionally shut down since Supergirl’s death.

On Page 8, the scene cuts to World War II where various DC war characters determine to get on with what they are doing.  An unexplained flash of red passes through the sky, similar to that which destroyed some of the Guardians.

Page 9 – The red skies flash through multiple worlds, where we also see that the heroes who have remained in various places are being defeated by an unknown force, presumed to be the army of villains.

Page 10 – Alexander Luthor (depowered), Lyla (depowered) and Pariah all address the UN on Earth 1 about everything that has been going on.  Lady Quark and Wonder Woman (in her Diana Prince identity) watch this on a TV in the shop window, where Lady Quark reveals she still can’t forgive Pariah for releasing the Anti-Monitor and leading to the destruction of her world.

Page 11-12 – To everyone’s shock, Pariah is suddenly pulled away, indicating that there is still danger.  Just then, Braniac and Luthor appear, revealing that Earths 4, X and S are under their control, and threatening everyone else.  This galvanizes Superman into action, as we see Clark Kent changing clothes in a storeroom into his more heroic identity.  “Kara died trying to save the earths.  I’ll not let her sacrifice be in vain.  This is a job for Superman!”

Page 13 – Similarly, Jack Ryder dramatically changes into the Creeper and runs away like a maniac.  The page then cuts to World War I where Balloon Buster sees the wave of red pass by in the skies.

Page 14-17 – Various heroes from Earth 2 are unable to break through a dimensional barrier to get to Earth 4.  Meanwhile, Jay Garrick and Lyla recruit Wally West back into action, in spite of the fact that his superspeed at the time is actually killing him.

Wally West and Jay Garrick activate a modified cosmic treadmill to allow various heroes to travel to besieged earths to defend them.  Amongst the heroes are Infinity Inc (including the new Wildcat), the Metal Men, the New Doom Patrol, the JLA, Creeper, Lady Quark, the Outsiders, the JSA, the Titans and more.

Meanwhile, Luthor and Brainiac are still in space, laughing about the foolproofness of their plan, not knowing that they are being watched.

Pages 18-19 – Under the general conceit of Luthor and Brainiac observing the battles happening across three earths, we see heroes fighting villains.  It starts on Earth 4, where the heroes are generally victorious except for Aquagirl, who is mortally wounded by Chemo.

Pages 20-22 – On Earth S, the heroes are unable to wrest control from the villains, and Steel is teleported by the villain Warp to who-knows-where.  Incidentally, we also see comic-book history’s only known example of the Fatal Five teaming up with the Penguin to accomplish a mutual goal.

Pages 22-24 – Things go similarly on Earth X, where Dr. Phosphorus mortally injures the Earth 2 Hawkman–but I’m pretty sure he doesn’t actually die (maybe because Marv Wolfman apparently had a thing against killing characters who were created before he was born, or before he was writing, or something).

Pages 24- 25 – Back on Braniac’s ship, Psimon suddenly reveals himself as the shadowy figure who remained behind.  He destroys Brainiac and promises to do the same to Luthor.  Just before this, Luthor refers to Brainiac as “pal”, which is super-weird from a modern perspective.