This is a great time to be alive for geeky superhero sci-fi movie lovers.  Star Wars:  The Last Jedi is approaching fast, and Justice League is just behind us.  It’s not that all of these movies are good, it’s just that there is always something to see.  And chances are, some of it will be good.

But in the midst of these back-to-back spectacles, it’s easy to overlook other sorts of projects–more modest films that are just as worthwhile, or more so, even for the type of young teen family that I’m part of.  In this case, I’m grateful that we didn’t overlook Wonder. 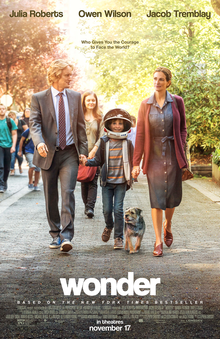 Not Wonder Woman, right?  That was a good movie too.  But this is Wonder, a movie directed by Steven Chbosky (his third, but the first that I’ve seen) and based on a novel by R.J. Palacio which one of my daughters has read.  The story is about a young boy named Auggie Pullman (Jacob Tremblay) who has all his life had severe facial deformities.  As he approaches 5th grade, his parents make the decision to enroll him school for the first time.  The movie wanders through familiar territory, with the likable outsider being at first shunned by his classmates before slowly making inroads with certain individuals, and eventually proving himself to his classmates.  Auggie is, somewhat predictably, very intelligent and particularly good at science, and in spite of many obstacles is able to overcome his challenges and take positive steps forward with accepting himself and finding his way in the world.

What keeps all this from being a trite is how honestly the characters are developed.  Auggie’s parents are played by Julia Roberts and Owen Wilson, and have a believably loving relationship.  There’s lots of humor to be found in their interactions, but there’s also conflict, disagreements and challenges…very much like every real marriage.  Their older child, Via (Izabela Vidovic), who is used to being ignored because of Auggie’s needs, is going through her own difficulties, and wavers back and forth between being self-absorbed and sacrificially supportive of her brother.  And Auggie’s own journey includes moments of realizing that in spite of his handicap, the world doesn’t always have to revolve around him.  All of these touches keep the film’s world grounded, allowing us to relate to the characters without becoming annoyed by them, and preventing things from being lost in sentiment.

The movie has a nice storytelling style in that it regularly shifts perspectives to allow the audience to see key events from different points of view.  In addition to seeing things through the eyes of central characters Auggie and Via, we also go into their respective closest friends, Jack and Miranda.  This broader range of viewpoints helps the movie to be about more than just Auggie’s plight, and fits the general theme of their being more to people than meets the eye.  According to my daughter, the book included two other perspectives as well, one of which she particularly missed seeing in the film version (Julian, the school bully).  But it’s hard to imagine seeing a whole other set of scenes without the story being dragged down.  Oh well, movies are movies and books are books.

The film is full of good performances, with Jacob Tremblay’s Auggie being the obvious standout.  He has an innocent sort of guilelessness which in director’s Chbosky’s hands manages to be charming without descending into sappiness. I also liked Izabela Vidovic’s Via quite a bit, which is good because a lot of the film revolves around her.  And Julia Roberts is typically wonderful, projecting strength in the midst of fretfulness.

There are some story beats that might make one grimace a bit–contrivances that feel somewhat forced, such as what happens on the opening night of the play that Via is understudying the lead for, or the predictable recipient of a special medal at the school graduation at the end.  But if you allow yourself to go on the emotional journey that the movie wants to take you on, anchored by a whole range of authentic characters, these sorts of moments are easy to excuse.

All in all, Wonder was a immensely satisfying movie, and one that my entire family (aged 11-48) got a lot of enjoyment out of.