Apparently, my friend who is feeding me these topics was sitting on an actual park bench when she thought of this one.    I have to admit it’s the sort of thing that never occurred to me before.

(Incidentally, this is #4 in a series of 47 posts about movies, with topics selected by my friend, each given to me after the previous one is written.  For more information, check out #1 here.)

So the topic here is “iconic scenes”, not necessarily “great movies”.  By that, we really mean scenes that really stand out memorable, and which help to define the stories that they are part of.  With that in mind, there are three films that come to mind.

But there are also those that don’t come to mind.  Like all of those spy movies where deep cover spies meet up with their handlers…those scenes almost always happen on park benches.  Also, 101 Dalmatians has a key scene (when the human couple meet) that takes place around a park bench, but I have a hard time thinking of that as genuinely iconic.

Instead, what comes to mind is…

Forrest Gump is the absolute grand-daddy of all park bench movies, with most of the movie being narrated by the titular character to a series of random passers-by.  I’m not a particular fan of Forrest Gump–it’d be on my list of overrated movies if that comes up in this series–but it’s hard to argue against the definitive nature of the locale where Tom Hanks uttered the equally iconic line, “Life is like a box of chocolates, you never know what you’re going to get.”

Good Will Hunting is a better movie than Forrest Gump, but still not a favorite of mine.  However, the park bench scene, where Robin Williams’ Sean Maguire finally gets Will to shut up by telling him like it is, is outstanding.  The clear but understated camerawork, the amazing performance by Robin Williams and the restraint showed by Matt Damon make it one of the best scenes I’ve ever seen.

This romantic comedy starring Julia Roberts and Hugh Grant is the first film to show up twice in this series, which is something I wouldn’t have expected.  But it’s got a nice little moment with a park bench where the main couple talk about how some people spend their whole lives together, and then this is revisited at the end when they are shown going forward in their lives together, sitting on the same (I think) bench.

Now an interesting bit of trivia about all this is that apparently this very same bench was bought later by someone who wanted to use it as part of his proposal to his girlfriend.  That doesn’t seem to have worked out so the bench was then donated to the City of Perth, where I happen to live!  It now sits, if the internet is to be believed, in the middle of Queens Gardens, a beautifully landscaped park right next door to Perth’s professional cricket grounds near the inner city.  When I found all this out while doing some quick research for this post, I shot over there and snapped a picture: 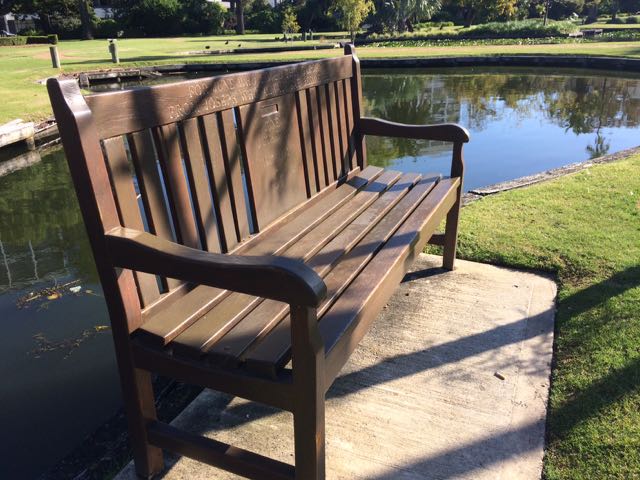 There you go.  Pretty cool, huh?  Now you too can come along with your significant other and lie on this bench (because that’d just be so comfortable!) while he reads a book to you.  Just another thing you can add to your to-do list in Perth when you come and visit me, along with the Impossible Triangle statue on East Parade, or the Seinfeld-mural on the wall of the parking lot I sometimes park at.