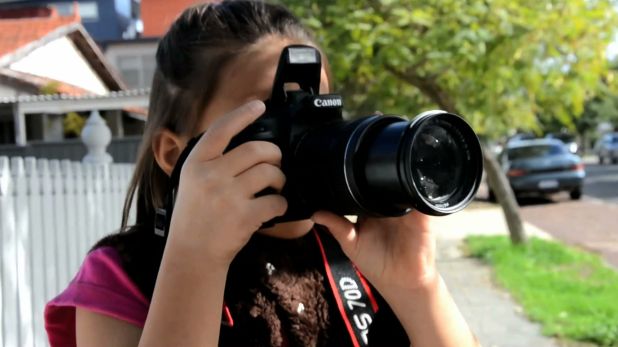 Recently, some colleagues at the missions community that I live and work in ran a 24 Hour Film Challenge.  This does not mean you have to make a film that is 24 hours long (that’s how my youngest daughter interpreted it, originally).  It means you have 24 hours to make a movie, going all the way from story conception through writing to filming to editing & post-production to handing in your final project.

It was a pretty small affair.  There were only three teams that entered.  I wasn’t going to participate since it came in the midst of a busy weekend and I wanted to spend time with family.  But then my wife and children had the idea of doing it together.  So it became a way of actually spending time together as family.  Another mum & child joined our team, and I asked one of my workmates to be part of things as well so we’d have another person on the team who had some experience with this whole film making thing.

The organizers of the Film Challenge gave us a few requirements for the movies.  First, it had to be between 3-7 minutes long.  Next, we had to work within two randomly-drawn genres:  “Mystery” or “Action-Adventure”.  We ended up going with “Mystery”.

There were also three required elements that all the movies had to contain:

• A character called Luke or Laura Williams, who is a photographer
• The presence of a spatula as a “required prop” (arguments ensued about what constituted a spatula, as it seems to be different from the United States and Australia.  Amusingly, the Australian organizer seemed to have an opinion more consistent with the American view.  In the end, my team covered all bases by having both types in there)
• The line of dialogue, “I don’t have time for this.”

We also had to use one of two randomly-drawn genres for our movie:  “Mystery” or “Action-Adventure”.  After very little time, we decided on “Mystery”.

And finally, the movie had to be between 3 and 7 minutes long.

The whole thing kicked off at 10:00 am and once we had all our information, we gathered in my house and discussed stories.  I came up with the initial hook (Laura Williams, a young girl taking pictures, witnesses a strange event on the street, and then begins to investigate…)  Everyone chipped in ideas, until we had the plot worked out.  (I don’t want to say too much here because I don’t want to give away the surprises.)  I wrote an outline of the story (we never wrote a script) and then organized props & costumes & started shooting.

I think we were particularly excited about the props.  First, I think we made an awesome use of the spatula.  But also, when we were breaking down the story, someone suggested having a <Big Spoiler> in the movie.  When I heard that idea, I thought, “That’s awesome!  But can we pull of a <Big Spoiler> in a film that we are making in less than a day for basically $0.00?”  It wasn’t long before my wife, ever the resourceful one, was onto it.  So while Jenni and I were shooting, Liesbeth was putting together the <Big Spoiler>.  I think we were all pretty happy with the results.

Laurelle, my youngest and possibly most dramatic daughter, took the leading role.  Johanna, the middle child, took on the part of the source of the mystery.  And Elissa, my eldest, was happy with a small part, and focused on helping with props and animals (some rabbits and our dog, Charlie).  That’s right, our 24 Hour film featured both animals and children, two things they normally advise you to stay away from in the world of film making.

We finished shooting around 5:30 and then took a break to eat.  After dinner, I started editing with the other adults (other than my wife), but by 11:00 I was working by myself.  The movie had to be handed in by 10:00 am the next morning.  I wasn’t up all night, but almost.

Really, this is the thing about doing a movie in 24 hours that really makes a difference:  the editing.  Shooting in a short amount of time is pretty common, but invariably you end up putting off the editing for a day or a week or a year until you finally pull yourself together and get it done.  (OK, when I say “you”, I really mean “I”).  After a long night of work, I had to send Elissa sprinting the last couple of blocks to the 24 Film Challenge finishing line in our to get our movie handed in at 9:59!  And amusingly, we were still not the last movie to get turned in.

That evening we had a screening of the three movies and a presentation of awards.  I’m sorry to say that we didn’t win the Best Picture award (a black and white detective drama took that one), but we did do well in several other categories, which meant that our team came home with a whole lot of chocolate bars!

Notably, Laurelle won the “Best Acting” award, beating a whole bunch of other people, including her parents and her sisters.  She’s still pretty chuffed about it, and was talking to me about it tonight, almost a week later.

Anyway, please enjoy the film.  This is technically not the film exactly as we handed it in, but it is 99.99999% the same.  All I’ve done since then is adjust a little bit of the sound levels and color, fix mistakes in the titles, and tweak a few frames of the film where we were having strange problems with our export.

So, presenting, A Strange One Down the Street (a title that was first thought of in the wee hours of the morning), produced by the team “Charlie and Friends” (ditto)…