Well, I did it.  I went and saw Fantastic Four.  After the reviews started coming out.  After the movie hit single digits on Rotten Tomatoes.  After the move became the superhero film fan’s sacrificial pariah.

My strategy, as I wrote previously, was to try to diminish my expectations so greatly that I couldn’t help but to be pleasantly surprised.

It sort of worked. 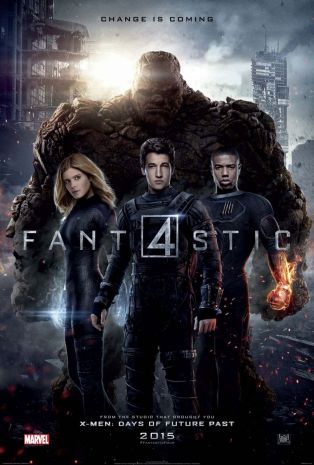 Now, I never want to have to be in the position of arguing for Josh Trank’s Fantastic Four.  It’s not a good movie.  I have no idea if it would have been a good movie if Josh Trank’s original version had been released.  I don’t know if the blame is Trank’s, or the studio (20th Century Fox) or some hybrid of the two.

(Uh…actually, I take that back.  I do know who is to blame – and that’s got to be both Trank and 20th Century Fox.  Both of their names are on it, and as the director and the studio, respectively, they’d both happily take the credit if the movie had succeeded.  So they both get the blame for its failure, whatever the process was.)

But anyway, the thing is, I didn’t hate this movie.  There have been other films that I have hated–other superhero films.  For example, I hated X-Men: First Class.  It evoked a feeling of passionate dislike from me.  Fantastic Four did not provoke me in this way.  This isn’t because it was better, though.  For sure, it was worse.  It was just less full of itself, and so I could more easily accepted the film for the inevitable disaster that it was.  And so where I normally an inclined to chip away at a movie’s weak spots to expose them, in this case I feel like I want to build it up a little.  Instead of saying what’s wrong with it, let’s open with what was not all that bad, shall we?  What about the movie did not actually live down to the depths that the avalanche of negative buzz articles on the internet have indicated?  If anything else, this will be a shorter list.

Well, first it should be noted that even though I am a comic book fan, I’ve only read a smattering of Fantastic Four comics and I have absolutely not emotional investment in an adaptation like this being “true” to the material.  I don’t really care if the origin story is radically different than the comic, I don’t care if Reed, Ben, Johnny and Sue feel or don’t feel like functional or dysfunctional family, and I don’t care if the source material’s light and upbeat tone is retained.  So all of the criticisms that are in that direction are ones that I agree with in concept, but don’t find to hold much weight when evaluating the movie.

So all that to say that I liked this movies tone.  I liked the attempt at “gritty science fiction”, and the heaviness of things, the dark color palette, and the nightmarish body-horror that the movie treats the aftermath of their power-inducing accident.  That feels pretty authentic to me.

I also liked the movie’s establishment of the four central characters.  I enjoyed Jamie Bell, Kate Mara, and Michael B. Jordan as Ben, Sue, and Johnny–all preferable over the cast from the more lighthearted movies from the last decade.  And I didn’t mind Miles Teller as Reed Richards, at least for the first half of the movie or so.  And I liked the visualization of the team’s powers, and thought the Thing looked pretty impressive, and enjoyed the pathos of his situation, even though he awkwardly wore no pants.  Most of the special effects–aside from one very odd CGI monkey–were enjoyable to look at.

So, there were things to like in the movie, and by far I would not call this the worst superhero adaptation that I have ever seen.  I mean, for sure it’s better than Batman & Robin, or Superman IV: The Quest for Peace, or Return of the Swamp Thing.

Unfortunately, that is probably the best I can say about it.

Most of the criticisms are already well documented.  The pacing is awful:  things take forever to happen.  The characters, though well established, do not develop…at all, and most of their relationships are non-existent.  Characters do lots of randomly stupid things, including taking their little interdimensional teleporter for a spin just so they could be “first”, but instead of being careful when they do that they engage in especially dangerous activities such as repelling down rocks and needlessly sticking their hands in alien glowy slime.  And Reed runs away for a year to do nothing of any importance, and is captured and brought back for no reason but to keep the plot moving.

But the worst, I think, is Doctor Doom, and his whole story and resolution.  At the start, he is sort of boring–just a bit unpleasant.  But later he dies and the film brings him back as an insanely powerful and stark raving bonkers extinction-level threat.  He’s the perfect supervillain…except that he’s lacking little things like explanation for what happened to him, motivation for his actions, or a visual appearance that doesn’t quickly become tired and tedious.  He shows up, almost dead from his ordeal on Planet Zero, but then recovers and insists that Planet Zero kept him alive, and now he’s going to use his awesomely powerful psychokinetic powers to make everyone’s heads explode–well, everyone except the people who might be powerful enough to defeat him.   He generically wants to destroy the world and kill everyone because he’s in a bad mood and he’s just going to live on Planet Zero from now on.  And because he was an activist, protesting stuff.  The Fantastic Four eventually beat him with the stunning strategy of Attacking Him All At The Same Time, and pushing him into some beam of light that makes him disappear, or something.

Really, he is defeated with the same lack of explanation that he appeared.

But now I’m just getting into ragging on the movie, like everyone else.

Yes, it is bad.  It makes a lot of fundamental mistakes.  But really, so do a lot of films that have not received this much backlash.  Maybe part of the issue is that the movie overall gets worse as it goes along.  But still, I didn’t hate it.  And because of the negative hype, I wasn’t really disappointed, in the way I was with Green Lantern (which I was hoping against reason was good in spite of all the reviews) or Man of Steel (which was genuinely disheartening and somewhat enraging to see).

Maybe this is the new way of things.  Maybe instead of hoping that movies will be good, I should go to see them being absolutely sure that they are bad…

No!  I won’t give in to that depressing view of things!  Movies can be good, darn it, they can!  Even science fiction special effects-laden epics!  I will hold onto hope.  I can have my cake and eat it too.

Who knows?  Maybe Batman vs. Superman: Dawn of Justice will be awesome!

3 thoughts on “Fantastic Four – Really as bad as all that? Um….”