Only days before the beginning of the two part season finale of Doctor Who (and the first two part story that the series has had for quite some time)!  But…I am going to miss it, because I’m going to Indonesia for a bit (darn this adventure-filled life that I live).

Of course, that’s not too big of a deal because I can always just watch it on the ABC’s website when I get back–I should be back just in time before part 1 expires.  And if not, well there’s always iTunes.

In the meantime, I thought I’d jot down a few thoughts on the season so far – at least the episodes that have come out since I last wrote about here and here and here. 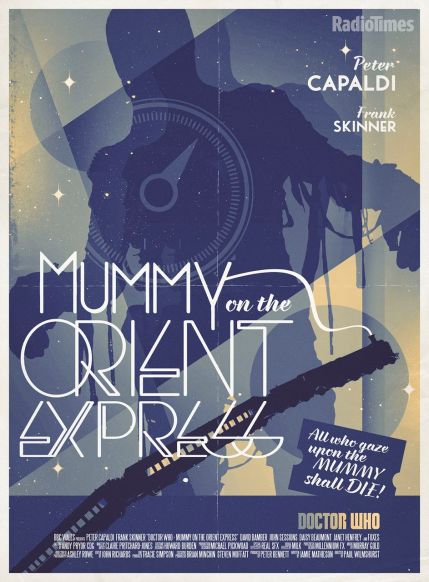 (Incidentally, how cool are these posters?  They are by an artist named Stuart Manning and have been released by the Radio Times over the course of the season.  Isn’t it strange that Jenna Coleman isn’t listed on this one?  It’s like they were trying to keep her involvement a secret or something – in case she really had just left the show after her outburst in Kill the Moon.  She wasn’t in the “Next Time” trailer either, but Clara was mentioned in the promotional blurb about the episode, so…oops!  What a giveaway!)

Mummy on the Orient Express

So…a train flying through space:  this, frankly, is one of the reasons that this show is awesome.  Maybe more than any other show on TV, it’s got the ability to show us such wildly imaginative imagery, while still making a claim that it all makes sense.

And the Mummy itself…that’s definitely one of the scarier looking creatures that I have ever seen on this show.  The repetitive nature of what it actually did made its actions a little less frightening (as a viewer, not for the characters), but the actual look of it was amazing, and that opening sequence of the old lady’s growing terror as she is unable to do anything about the creature’s approach was impressive.

The plot itself was also pretty good, and I’d like to hope that we’ll get some understanding of what was going on with Gus the psychotic artificial intelligence before too long.  Of course, it may be that it all gets explained unsatisfactorily in an off-hand remark a couple of seasons down the line (we take the good with the bad).  But either way, the treat of this episode is the characterization of the Doctor himself, along with Clara’s response to him. His apparent heartlessness toward Maisie suddenly being turned around in an act of self-sacrifice is a defining moment for the character.  And on top of that, we had that brilliant moment at the end where the Doctor and Clara actually discuss this.  Clara is relieved to discover that the Doctor was just pretending to be heartless, to which he replies, “Would you like to think that about me?  Would that make it easier?  I didn’t know if I could save her.”

It’s a good continuation of the season’s theme about whether or not the Doctor is a good man.  That and the ongoing discussion of the role of soldiers make this feel like more than just a good series of episodes, but a strong season of Doctor Who. 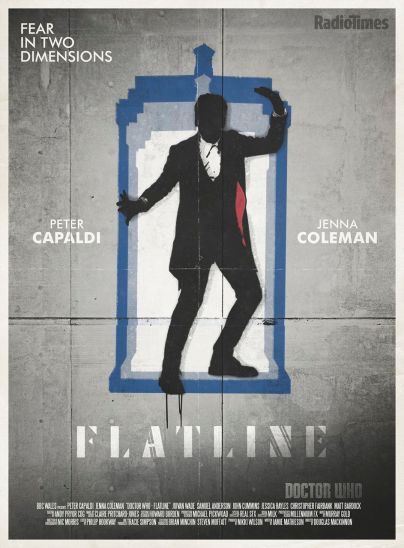 And so new-to-Who writer Jamie Mathieson delivers a second script in a row for the show, which is the first time that a writer who wasn’t also a senior member of the production team has done this since David Fisher penned two segments of the “Key to Time” arc back in 1978!  Flatline is another strong entry in the series and once again features a brand new and well realized monster.  The “Boneless” as they are named are a cool idea, and it is an indicator of how different this series is than say, Star Trek: The Next Generation (if we need such a thing) that they are revealed to not be misunderstood or confused aliens, but actually malevolent monsters.  The leads to some of the most striking character deaths that the series has ever had, such as the unfortunate police officer being pulled into the floor, as well as that bit with the giant hand.

Flatline again delivers high-fantasy imagery, such as the Doctor’s face sticking out of miniaturized Tardis, or the creepiness of the Boneless’ three dimensional forms.  It also features credibility-stretching adventure, such as the sequence with the train.  But it anchors all this with strong character work between Clara and the Doctor that make this series so much fun.  It garnishes it all with witty dialog and a light touch, making it one of the strongest episodes of a strong season. 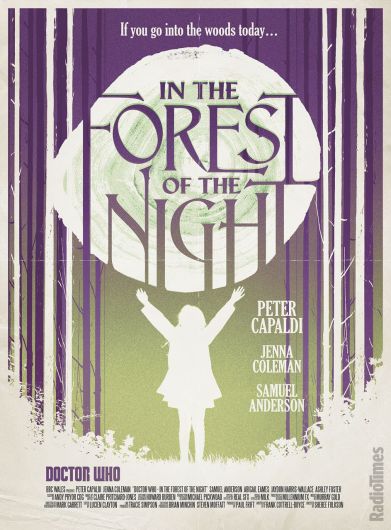 In the Forest of the Night

And this is followed by one of the weakest entries in the season – perhaps the weakest episode up to this point.  In the Forest of the Night has a great hook – a giant forest has grown up all over the world, all at once.  And from that hook, it  attempts to tell an engaging science-fantasy mystery about what the trees are really up to.  It tries to do this while drawing from a wealth of fairy tale imagery, with forests and wolves and so on.  And it is trying to explore an interesting character dynamic between the Doctor, Clara and Danny.  And it implies a little ecological morality lesson well:  you know, the trees are our friends.  They will save us from the nasty, evil sun and its vicious solar flares.  But not, as others have mentioned, when the Sontarans try to poison the earth.  Or when the Daleks invade and try to kill everyone.  Or when human beings start forest fires.  Also, the trees apparently stop the solar flare by taking away the oxygen – nevermind that that would also kill all the people.

Aside from that, there are other weaknesses. The characterization isn’t as strong or illuminating as it wants to be, with the guest stars kids being particularly uninteresting.  And I don’t know if I buy the fact that Clara wouldn’t want to try to save the children from dying with the rest of the earth if she had the opportunity.  Certainly, as a parent, I guess I’d prefer my child’s school teacher to save my daughter’s life even if it meant she had to go on as an orphan.  Also, the production values of the episode are weak.  It’s supposed to be the present day, but the absence of anything like a crowd of people in London makes it feel more like it’s happening in some sort of Planet of the Apes-style future – the end result is that it all feels a bit cheap.  And various things seem to happen pretty randomly, like the whole deal with young  Maebh.  Why is her missing sister hiding in a bush at the end?

The ultimate lack of tension doesn’t necessarily help the episode either.  In the end, the biggest trouble that the characters get into is when a tiger shows up – but don’t worry, Danny Pink is there to scare it away by blinking a flashlight into his eyes.

Doctor Who has always been a show that has demanded of us some serious suspension of disbelief to embrace its concepts – whether it’s about a teleporting hollow planet that crushes other worlds to provide its citizens with riches, or a world of mathematicians who keep the universe going with their calculations, that that’s actually been one of the series’ charms.  But even though I still like Peter Capaldi, Jenna Coleman and Samuel Anderson, and I think they are all doing an excellent job, I find the cumulative impact of all of In the Forest of the Night‘s weaknesses make it hard to give the episode’s implausible concepts a pass.  It’s kind of like Kill the Moon, except without any of the cool bits.

And so that’s that.  Ten episodes down, two to go – hopefully the biggest two of the year.  By and large, it’s been a great season so far, and the regulars have been on fine form.  The preview looks exciting, and I’m looking forward to seeing it all when I get back in a week and a half!