I travel a fair bit, which I don’t normally write about that much, but I thought I’d give a quick shout-out to Hocking Hills State Park in Ohio. My wife and I were driving from Chicago to New York, visiting friends along the way. I wasn’t seeing anyone in Ohio and was looking for a place to stay. Looking up attractions in Ohio, I came across the Hocking Hills, which has a number of things to see that are well worth it if you have the chance.

After we had made the choice, I found out that I have actually “encountered” one of these attractions before, in a manner of speaking. It was in a comic book, of all places.

One of my favorite non-superhero comics (there are a few that I have enjoyed) is Bone. If you are not familiar with it, it was a 60+ issue series published originally in the 90’s, written and drawn by Jeff Smith. The best way I can describe it is basically a combination of Pogo (or maybe Peanuts, if you don’t know Pogo) and Lord of the Rings – an all-ages humorous tale of three odd creatures (called “Bones”) and the increasingly strange and dark and sweeping adventure they have when they get lost amongst the land of the humans.

(I apologize for all the poor quality of the images in this post.  Not only do I not have access to a scanner right now, but all the photographs are taken on my phone.  Some people can obviously get some really stellar images on their phone camera – I obviously am not one of them.)

Anyway, I really enjoy Smith’s work. Without being an art expert, I’d call him something of a master at facial expressions and visual-comic (as in “funny”) pacing.

Anyway, in the 6th collection of Bone (out of 9), the heroes retreat to a place called Old Man’s Cave (in fact, the volume is even subtitled Old Man’s Cave), where an ancient order of warriors are re-emerging to train and prepare for an upcoming battle. 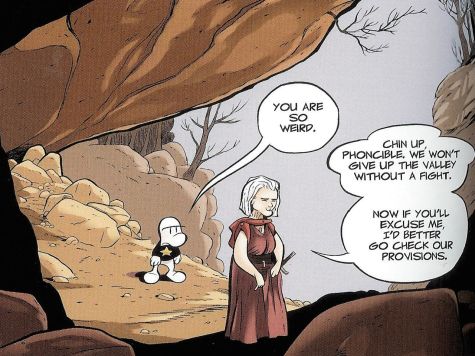 Well, it turns out that Old Man’s Cave is a real place, and it’s located in the Hocking Hills. It’s the most popular tourist attraction in the area, and was our first stop on our one full day there.

Old Man’s Cave is not a true cave, but a cavern that opens up to a beautiful forest, leading down to a waterfall called Cedar Falls. It’s a beautiful place and it’s easy to see why it would lend itself to the sort of fictionalizing that Smith does to it in Bone. 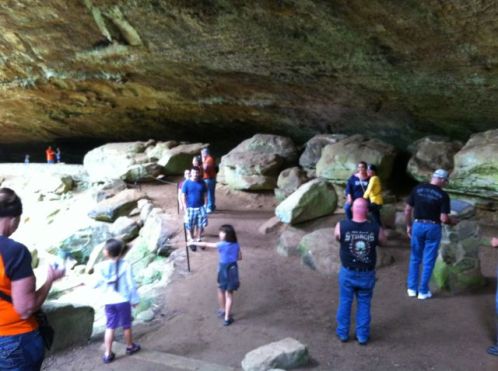 We only had one day to take in as much of the Park as we could. Plus, it was threatening badly to rain. So we never went to the Upper Falls “above” the Cave, instead going straight toward the Lower Falls…

…and through the subsequent forest via Buckeye Trail. This brought us to some memorable sites. 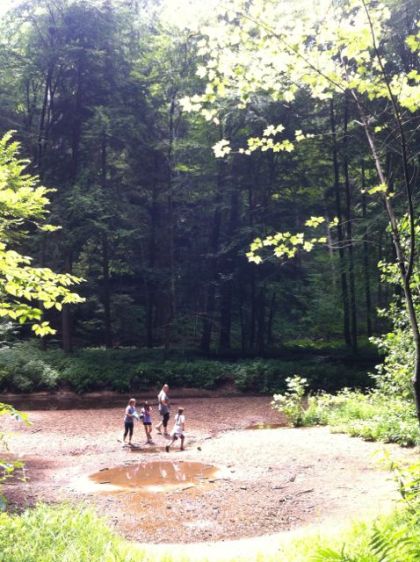 The walk to Cedar Falls was about three miles, and it was quite muggy, so we were all pretty wiped out by the time we got to the end. Cedar Falls wasn’t much to look at, but apparently would have been a lot more impressive if it had rained more this past season. 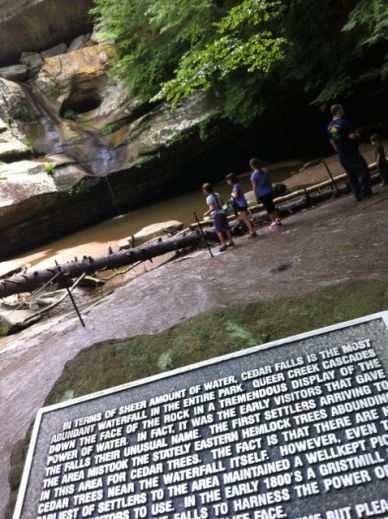 Supposedly, we were going to have to then turn around and walk back to get to our car, except that my bold and persuasive wife managed to get someone to agree to give her a ride back to Old Man’s Cave. By this time, it was raining, so that was much appreciated.

We didn’t let the rain stop us, though, and went to some of the other local sites. First, there was Ash Cave which was by far the most amazing thing I’d seen on a day full of amazing things. 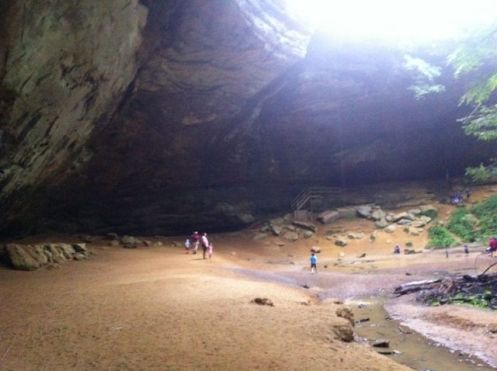 Ash Cave is another cavern, but it’s huge – a high and broad panorama of rock and light and shadow. The rain was now yielding a long but thin waterfall which my kids (and I) couldn’t help but stand beneath.

After that, we finished our day with the Rockhouse, which is the only true cave at the Park. This was my daughters’ favorite part of the day – climbing through a big cave, lit by various openings along the side, and exploring tiny little caves on the inside thanks to the flashlight in my cell phone.

There are lots of private cabins that one can rent in Hocking Hills State Park, but we opted to stay in the less expensive State-run cottages. These had gotten some pretty bad reviews on the internet, but for what seemed to us to be silly reasons (eg. There were cobwebs in the corners, there’s some mold in the bathroom, etc. I guess I hope these people never come to my house!) We enjoyed our stay there. We had a nice dinner at the local lodge, and if it hadn’t been raining, we might have had a swim in their pool. We roasted some giant-sized American marshmallows at the shared fire pit. The only downside came when my 9 year old accidentally locked us all out of the cabin! But some kindly neighbours and helpful rangers soon sorted all that out.

So two recommendations today – Hocking Hills State Park, which is well worth the visit if you are in the area – and Bone by Jeff Smith, which is a lot of fun and a good rousing adventure, although perhaps a little too intense for my younger children at this stage.