That new laptop came with $100 credit at the iTunes store. That has led to some other TV viewing, beyond the Doctor Who and Star Trek repeats that I so often write about. I can’t really imagine taking on another series of episode by episode comments, but I thought I’d share my thoughts and opinions on some of these fine samplings…

I’m not sure what grabbed my attention about this show. I never watched it while it was on, and I’ve only heard a few things about it since then. Maybe it came to my attention when the crowd-funded movie came out. In any case, I decided to give it a go and watch the first season not long ago.

First of all, it’s hard not to be reminded of a more serious and less fantastic Smallville while watching this. No, there’s no super-powers, and no teenagers who have been driven crazy by radioactive meteor rocks. Instead, there are a bunch of teen agers who seem to have gone crazy all by themselves. Or maybe they have been driven crazy by their unspeakably bad parents.

Like Smallville, Veronica Mars is a show about the lives of unruly, hyper-sexed, entitled teenagers who are constantly surrounded by murder and mayhem. The lead character is a savvy teenaged investigator with short blond hair, not unlike Smallville’s Chloe Sullivan, except with more grown-up writing. Her first boyfriend on the show is even played by Aaron Ashmore, who played Chloe’s love interest for a few seasons on Smallville.

There is a lot to like on Veronica Mars, and also some to dislike. Most of those I could live with, but I finally got so tired of one of those points that I gave up on the show.

On the positive note, the series does a great job of developing its mysteries. The 22 episode season is a bit of a downfall for a lot of American shows, especially ones that attempt to be more plot-driven. It leads to a lot of repetition and sometimes extremely slow builds (how many times did we have to watch the cast of Arrow whine about how different Ollie is since he came back from the dead, followed by Ollie whining that it was hard for him on the island, etc.?) But Veronica Mars managed to keep things interesting by deftly juggling a variety of mysteries that would run for single-episodes, for arcs of several episodes, and for the entire season.

The cast of the show was decent with a few standouts. Kristen Bell was certainly appealing as the lead, and so was Enrico Colantoni as her father – one of the few adult characters in the show who was not treated as a complete nitwit or sleazebucket. I was also impressed by Jason Dohring as Logan Echolls, and thought it would be interesting if the show developed him as the “real” love interest. Unfortunately, it jumped into that a bit too quickly (though it just as quickly jumped out of it).

On the annoying side, as I already implied, pretty much all of the teen characters in the Veronica Mars world, no matter how messed up they are (and many of them are extremely messed up), are treated as being smarter than nearly all of the adults. Maybe I’m just getting older but I find that a bit tiresome to have this world where nearly every young character is just trying to make their way through their teen years, surviving their overbearing / uncaring / absent / moronic / abusive parent figures.

Veronica herself is perhaps a bit too smart and capable – though the series did subvert that at the end of the first season in a very plausible way when it positioned her into needing rescuing by her father. And the show falls into the trap of trying too hard to prove that the main character is good looking by having characters in the show talk about it pretty regularly.

But the thing that really put me off of Veronica Mars is how determined it was to go as far as it could get away with on its timeslot with showing sexual content. It wasn’t every episode or every scene, but regularly enough the series seemed to feel it needed to show near-nudity and debaucherous teenagers as if it was trying to prove it wasn’t afraid of being “adult”. The end result is actually quite adolescent in the most negative sense – something that tries to prove it is “mature” but ends up doing so in a way that proves it still has a long way to go to grow up. I disliked this in Season One, but decided to give Season Two a go anyway, only to find that the first few episodes of the show’s second year were even worse. Feeling increasingly uncomfortable with it (in spite of my continued enjoyment with the series’ plot and pacing), I decided that enough was enough.

Currently, no plans to finish the series. Maybe one day I’ll find out the story behind that bus crash.

We fast forward a few years, from 2004 to 2011, and get the first season of this alien invasion series which takes the novel approach of starting it’s story months after the initial attack has already taken place, just as the resistance is trying to find its feet. Noah Wyle (who has aged well from his ER days as Carter – I don’t remember if that was his first or last name) stars as Tom Mason, a former professor of military history and family man who suddenly becomes the second-in-command of a resistance unit (100 fighters, 200 civilians) who are on the run near Boston. They are led by a Captain Weaver, played by the always reliable Will Patton, whose grouchy, by-the-numbers but slightly unstabale manner clashes with Tom’s reasonableness. Tom gets to fight aliens, worry about his children’s well being, and occasionally deliver inspirational history lessons about wars and battles of the past.

Amazingly for an American TV show, each season of Falling Skies (there are three out there so far) has only 10 episodes. This helps the series greatly to avoid the whole trap of time wasting and “filler” stories – every segment feels relevant to the overall plot and it doesn’t take too long to get through a season. It also helps the show to be very tense. Especially as I was first getting into it, I had no idea which characters of the many were regulars (and were therefore likely to survive) and which were guest stars (and were likely to get killed off). There’s a little arc in the middle of the season where the humans have an alien held prisoner that I found especially nerve-wracking.

But the series also avoids become too depressing or too dark, and never relies on “shock” deaths to keep the drama alive (I’m looking at you, Lost). In fact, the mood of the series of often quite optimistic, thanks to Tom’s hopeful attitude and the series capacity to use its Boston locale to evoke American patriotism. That may rub some viewers the wrong way, but overall I find that it works.

Every once in a while there is an example of something clunky in the direction, but in general Falling Skies is a show about a few interesting characters (as well as a bunch of other guys who seem to be around mainly to add weight and mass to things) dealing with an interesting situation. The result is good drama – who’d have imagined it? 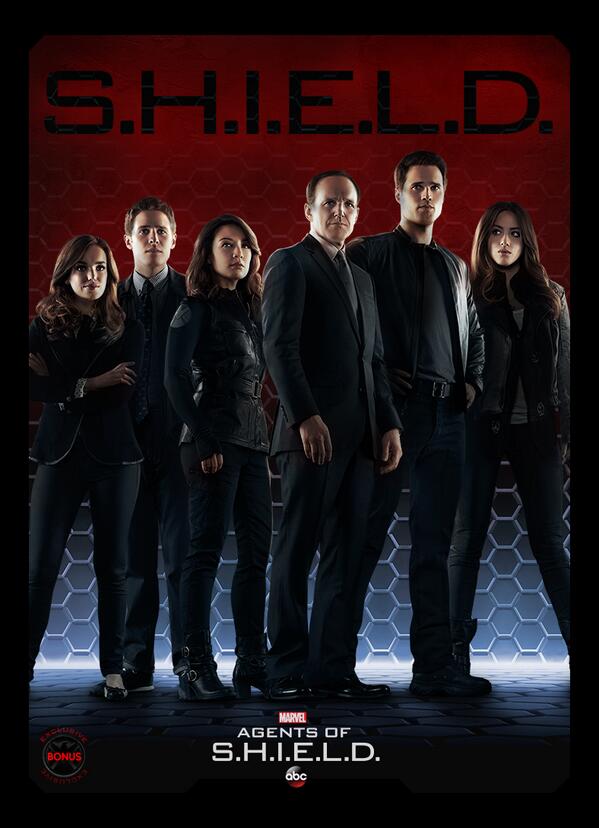 I haven’t seen all of the first season of Agents of SHIELD yet. I missed one episode in the middle, and I haven’t watched the finale yet. So I don’t know how well the various plots “land” at the end of the year. But based on the episodes leading up to the ending, it’s looking pretty hopeful.

Agents of SHIELD is has turned out to be one of the biggest surprises of any series I’ve watched recently. When it started, I found it more than just a little bit tedious. It was not as smart as I wanted it to be, and it was not as fun. I wasn’t really a fan of any of the characters.  I remember thinking that if this show survives it’ll probably get better as it gets into the second season.

It was clear from the beginning that Agents of SHIELD is the sort of show that wants to be plot-driven. But it seemed that the production team was reluctant to commit to that idea, instead attempting to “build the audience” with a general premise that could be repeated from week to week: super-spies fighting menaces that were not quite Avengers-worthy. But lackadaisical storytelling and characters that were trying too hard to be catchy made that premise uninspiring, and almost completely lost me. But then we had that mid-season “finale” where Coulson is kidnapped and the promise of finding out what happened to him that caught my interest, followed by a general improvement to the writing, and finally kicking into high gear with the tie-ins to the events of Captain America: The Winter Soldier.

The second half of SHIELD’s first season were jam-packed with one surprising revelation after another, and they were as well done as any I have ever seen. Because I have watched more than one season of 24, as well as Alias and a Mission: Impossible movie or two, I know that the least-secure place in all the world is the top-secret law-enforcement spy organization. So it’s no surprise that Agents of SHIELD went down the narrative route of the “traitor in our midst” plot, but it pulled it off elegantly by offering up Agent May as a bit of a sacrificial lamb (making it appear briefly that she might be a villain) before revealing the truth of Ward’s card-carrying loyalties to HYDRA.

It was the perfect twist – completely surprising, but also a bit of a relief that this character I often found to be a bit shallow was actually eeeevil, and thus not as badly written as he often seemed. And the series also introduced Agent Triplett at the same time, with his heritage connection with the original Howling Commandos, who is the built-in replacement from a team point of view. And Ward’s betrayal served to redeem (from a series-enjoyment point of view) the character of Skye, who got her absolutely best scenes of the year first in the diner and then in the plane when she was telling Ward off for what a complete scumbag he was, in spite of his failure to comprehend it.

So I haven’t watched the season finale yet because right around the time it came out, my wife decided she wanted to catch up on the series (after being behind by about eight episodes). It doesn’t seem like that is going to happen, at least not any time soon. I may watch it tonight. If I do, I hope that I get to watch Coulson, May or Skye (or even Fitz) gun Ward down to his gloriously satisfying death. I hope the whole plot with Agent Garrett is completed. I hope neither of these characters are around to pop up again in Season Two just when we need a bit of a ratings boost (that’s a trope that we’ve just seen too many times before – Nina Myers, Lex Luthor, Aiden Ford – even when it has worked). I hope Triplett and even Mike Peterson get to join the crew full time. And I hope we’re off to stronger, sharper, more cleverly written adventures for years to come.